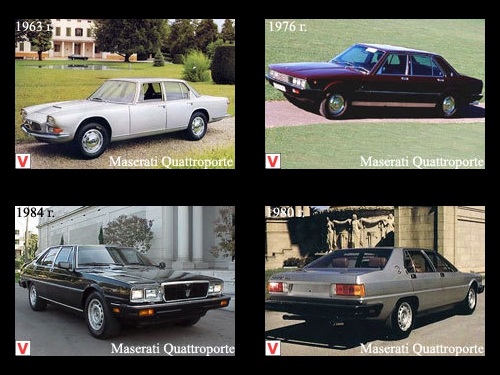 In April 1963, the production of the legendary car Quattroporte began. The debut took place at the Turin Motor Show. The beautiful Italian word "quattroporte" translates as "four-door." In accordance with the name of this instance with a sedan became the first in the history of the company 4-door car. The frame of the novelty was a complex combination of the carrier platform and subframe for the engine and the front suspension. The first cars received the rear suspension De Dion, but in 1966 it was abandoned in favor of the usual driving axle with guide rods. The famous Italian designer Pietro Frua worked on the exterior. Inside reigned comfort and convenience.

The car could boast air conditioning, electric windows and other items of luxury equipment. With all this, the Quattroporte was a real sports car. Under the hood, a V8 engine of 4,136 cm³ (260 hp at 5,200 rpm). This engine with four carburetors and the same number of camshafts, was equipped with a 5-speed manual transmission. 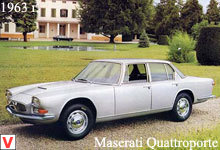 Among the lucky owners of this car are such famous people as Marcello Mastroianni, Peter Ustinov and Leonid Brezhnev. The second generation Maserati Quattroporte was shown at the Paris Salon in 1976. Over the design of the body worked masters studio Bertone. The car received a hydropneumatic suspension and a 3.0 liter V6 engine. But he did not go to the series because of the increased strike movement in the industry and the difficulties caused by the unsuccessful alliance between Maserati and Citroen. 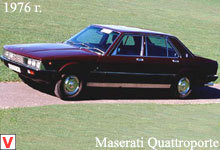 Nevertheless, several copies were nevertheless collected and today collectors are hunting for them. In 1979, the production of Quattroporte III began. The big sedan has become the primary model in the Maserati production program. The design of the third generation machine was developed by Georgetto Giugiaro. In the 80s the then Italian President Sandro Pertini traveled by car like this.

After joining Maserati in 1993 to the FIAT concern, the fourth generation Quattroporte appeared. Sedan debuted in April 1994. Thanks to the slightly risky design of Marcello Gandini, the model became the apotheosis of the 30-year evolution of the Quattroporte. The spacious cabin could comfortably accommodate four passengers. In the decoration of the interior decoration is a win-win combination of expensive leather and wood. Soundproofing cabin at a very high level. The car was offered in three versions - with engines of 2.0, 2.8 and 3.2 liters. The manufacturer took care of the safety of passengers. 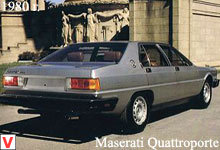 Quattroporte IV is equipped with an airbag, 3-channel ABS, reinforced doors and an automatic fuel cut-off system upon impact. In 1997, Maserati experienced another crisis, accompanied by a sharp decline in quality. Annual sales fell to a record low of 700 cars. From a protracted corkscrew, the firm was brought by its former rival and geographical neighbor - Ferrari. The fifth generation executive sedan Quattroporte debuted at IAA'2003 - exactly forty years after the appearance of the first generation of this model. The stunning design of the Quattroporte V is the work of the Pininfarina atelier.

The car has become the most popular model of Maserati over the past few years and has allowed the company to dramatically increase exports. The 21st century Quattroporte is an attempt to combine in a single car a representative sedan and a sports car. The Italians were able to give the more than five-meter sedan grace, elegance, assertiveness and swiftness of a sports car. Classic proportions are indicated by a long bonnet, a minimal front overhang and a fast-moving roofline. Deliberately old-fashioned vertical lights and a high trunk behind create a very solid look. A noteworthy fragment of the exterior is the vent in the front wings. 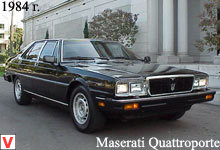 A large, low-mounted air intake radiator, chrome-edged hot air channel on the wings eloquently testify to enviable dynamic qualities. Characteristic features of the silhouette - a strong slope of the windshield and a shortened trunk. Behind these design features are hidden layout details. To make the car more stable, engineers pushed the heavy engine behind the front axle, dragging, thus, the center of gravity closer to the center of the car. The gearbox is shifted to the leading rear axle, which is quite typical for sports 2-door models, but has not been used on a sedan yet.

Another non-standard solution is a gas tank installed behind the rear seat. Despite the small rear overhang, the luggage compartment turned out to be quite roomy - 450 liters. As a result, the Quattroporte has a close to ideal mass distribution along the axes (47: 53%). It is noteworthy that despite the widespread use of aluminum (hood, trunk lid, engine parts and suspension), Quattroporte weighs almost two tons. The dimensions are very impressive 5.05x1.89x1.44 m, so there is enough space behind the folding wooden tables at the back, as well as an individual three-level air-conditioning system for two passengers. 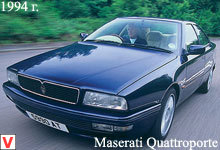 The spacious cabin has four adjustable seats with heating and ventilation. Due to the wide range and a large number of adjustments (including a multi-level lumbar support), it is easy to fit the seats with the electric drive and the steering wheel is easy. The range of finishing materials includes leather in 10 shades, mahogany and polysander wood, and even dogrose. The most spectacular fragment of the interior is the center console with figured sidewalls and the Maserati branded oval clock. The dashboard in front of the driver is replete with all kinds of buttons and switches. Under the hood, the Quattroporte has an atmospheric 4.2-liter 32-valve V8 (400 hp, 450 Nm).

The engine, without any superchargers, is made at the Ferrari factory and is also installed on Maserati Coupe GranSport and Spyder supercars. In standard equipment, the engine is aggregated with a 6-speed manual gearbox DuoSelect, which is equipped with an electro-hydraulic gearshift system using the keys mounted under the steering wheel. It can also work in fully automatic mode. The maximum speed reaches 275 km / h, and acceleration from zero to 100 km / h takes 5.2 s. 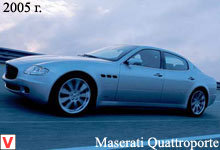 But this is with manual gear changes and the absence of passengers. The driver is insured by the firm system of dynamic stabilization MSP. Adaptive suspension borrowed with minor changes from the Ferrari 575M Maranello. In addition to the usual Quattroporte, there are also versions of the Executive GT and Sport GT, which were shown in Frankfurt in 2005. Their exterior is different decision finishes and large diameter wheels, interior - decor and equipment.

Executive GT received a more elegant color scheme of the body, chrome grille and side deflectors, 9-spoke 19-inch chrome wheels. The interior has exquisite wooden inserts, and the ceiling is trimmed with Alcantara. The steering wheel is also trimmed with leather and wood; a folding table with wood or titanium trim is provided for the rear passengers. There is a large selection of options for further personalization of the car. The exterior and interior versions of the Sport GT, by contrast, are more aggressive. The console is trimmed with carbon fiber, a sports steering wheel and a parking brake handle are applied, pedals with aluminum lining.

Externally, it is distinguished by 20-inch wheels. The newest transmission with electronic filling is able to shift gears 35% faster than the previous one, and the new exhaust system is tuned to a more “sporty” sound. Changed the settings of electronic brake systems and shock absorbers. Among the owners of the model is F1 champion Michael Schumacher, Italian President Carlo Adzelio Champi, Silvio Berlusconi. Five years after the debut of the fifth generation, according to the decrees of the market, the sedan was restyled.

The world premiere of the 2008 model year Quattroporte was held at the Paris Motor Show. Italian specialists faced a difficult task - to improve one of the most beautiful and modern cars in the world. They coped perfectly well with their task. Changes in the design and appearance of the car a bit. Identify the restyled version of the easiest way to a new grille with vertical "bars", as in the coupe GranTurismo. In the head and rear optics, LEDs are now being actively used, the shape of the headlights has slightly changed.

For the sake of aerodynamics, the shape of both bumpers has been slightly modified (they have become more streamlined), and under the doors special moldings are installed that optimize air flow. A different form acquired exterior mirrors. The interior of the car has a new center console with a display for an upgraded navigation system.

The range of finishing materials has expanded: there are two new varieties of leather that can be upholstered in the salon. The car is available in two versions: as standard, with a 4.2-liter 400-horsepower V8 engine and in the sports version S with a 4.7-liter “eight” with a capacity of 430 liters. from. Both engines are paired with a 6-speed automatic transmission, developed by Maserati in partnership with ZF. The calculation of the Italian manufacturer was made only to slightly refresh the model and thereby warm up the interest of the public to the car. The world debut of the sixth generation Quattroporte was held in January 2013 at the Detroit Auto Show.

Compared to its predecessor, the 2014 model year Quattroporte has grown in size. Its length increased to 5 263 mm (+163 mm), width - to 1 948 mm (+64 mm), and the size of the wheelbase added 107 mm and is now equal to 3 170 mm. The car is assembled on a completely new rear wheel drive platform. In the manufacture of which used lightweight aluminum, to lose weight of the car. Mass sedan managed to reduce the hundred kilograms. Depending on the modification, the car weighs from 1,860 to 1,900 kg. Compared to its predecessor, the Quattroporte VI has become more elegant and sophisticated. At the same time, the car body has not lost the charismatic outlines inherent in the fifth generation.

The car retained the original grille, but received a new bumper, more aggressive head optics, a different hood, trunk lid with an integrated spoiler and other taillights. In profile, the new product is easily recognized by additional windows in the rear pillars and a pronounced side line, which was not there before. The interior of the sedan has changed more significantly.

Due to the increase in the wheelbase, the level of comfort for the rear passengers has increased significantly - the place has become much more, which was not enough for the previous generation model. The front panel is executed in a minimalist style. The center console houses a large color display of the infotainment system, as well as a climate control unit. Branded oval clocks have retained their rightful place between the central ventilation deflectors.

On the sixth generation Maserati Quattroporte V-shaped 6-or 8-cylinder power units are installed. The base engine was a 3.0-liter twin-turbocharged V6, delivering 410 hp. and peak torque of 550 Nm.

With such a unit under the hood, the rear-wheel drive version exchanges the first hundred in 5.1 seconds, and the optional four-wheel drive reduces the acceleration time to 4.9 seconds. By the way, the all-wheel drive system was developed by Magna, and under normal conditions, it transmits traction to the rear wheels. But if necessary, the time can be distributed between the axles in a 50/50 ratio. The top version received a 530-horsepower twin-turbo V8 engine, developing a maximum thrust of 710 Nm. 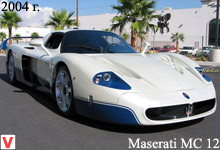 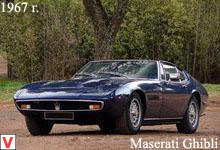 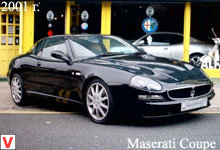 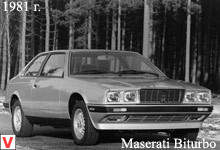 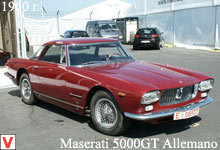 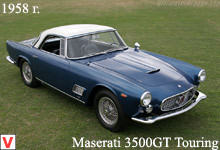