But the development of the company sorely lacked material resources and the “British” began to look for a partner. To continue the development of an SUV was only in 1994, when the bankrupt Rover Group bought the company BMW. The first generation Land Rover Freelander premiered in 1997. Its mass production was deployed at the main Land Rover plant in Solihull (UK). The appearance of the first generation Freelander was similar to the older brothers of the time. The characteristic step on the roof in the style of the Discovery SUV was especially striking. Also characteristic of the crossover were plastic unpainted elements, stretched along the entire perimeter of the body. 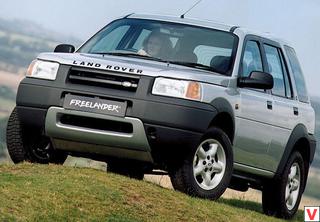 The interior of the car was very ascetic. In the decoration used inexpensive materials. First, the British released a practical 5-door version of Freelander, but already in 1999 the light saw the three-door version. A car with three doors was not just a shortened version of the model - the driver, if desired, could remove the half of the roof above the rear seats.

There were two variants of such Freelander: with a soft top (Softback) and with a removable hard plastic cap (Hardback). The crossover had a self-supporting body, independent suspension of all wheels like MacPherson and a transverse engine. There were no off-road lotions in it. 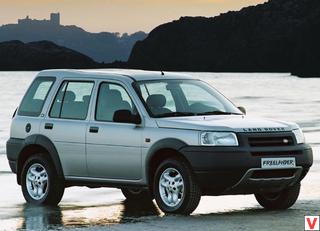 Neither downshift nor mechanical locking of the differentials, and the torque between the front and rear axles was distributed using viscous coupling. Front mounted disc and rear drum brakes. However, already in the basic configuration, the car was equipped with an electronic traction control (ETC) system, which does not allow the wheels to slip idly - the torque is transferred to other wheels, which can also be braked.

Freelander I also had an electronic control system for descending from the mountain HDC, which makes it possible to easily move out of any mountain at a speed of no more than 7-9 km / h. At first, the Land Rover Freelander was equipped with a 1.8 liter gasoline engine producing 120 hp. and a 2-liter turbodiesel (98 hp). Engines are aggregated only with a manual transmission. Motors were obviously losing to the body mass of an SUV, as a result of which there was a lack of power. Therefore, in 2000, the line of power units was updated. 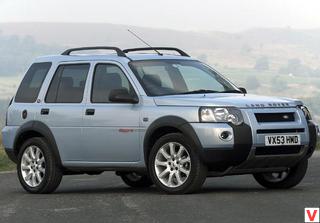 The choice of the buyer were offered two gasoline engines of 1.8 liters (117 hp) and 2.5 liters V6 (177 hp), as well as one diesel engine with a turbocharger of 2.0 liters (112 liters). from.). In addition to the 5-step “mechanics”, a 5-step “automatic” became available. Despite a number of drawbacks, Land Rover Freelander I enjoyed steady demand in Europe. In 2003, Freelander experienced a restyling. The public presented a modernized car with a modified appearance, redesigned interior and a number of structural improvements.

The focus was on the exterior of the car. There is a new front optics in the style of the Range Rover with two separate lenses for high and low beam. The lights have become not only look spectacular, but also shine 70% brighter than on the first years Freelender release. The car received a completely new front part with a more massive bumper and a modified grille. Another of the external changes can be identified new rear bumper with integrated brake lights and three new colors of painting. There are fewer plastic unpainted body elements, since after restyling, the front and rear bumpers began to be painted in body color. 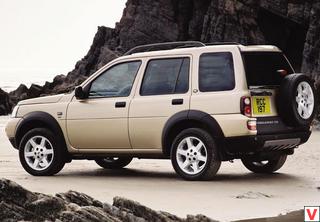 The front wings are made of impact-resistant polymer, and the front glass is made of polycarbonate, which protects these parts from damage from flying stones or off-road obstacles. Body type modifications have been saved - either a 3-door version with an open rear section, closed with a soft top or a plastic removable rear section, or a 5-door version. Interestingly, in terms of wheelbase, track and overall dimensions, the 3- and 5-door versions are exactly the same. The glass of the tailgate without frames and made lowering is a unique feature of the Freelander.

The interior has an updated dashboard and center console, decorated with inserts "under the brushed aluminum", a stylish combination of devices with chrome rims, three new colors in the interior design, new front seats with extra comfort, as well as improved heating, ventilation and air conditioning. From structural changes can be distinguished intermediate reduction gear (IRD) in the transmission, the fuel tank of increased volume for the gasoline versions, an improved system for shifting gears of the mechanical and automatic gearbox, a new viscous coupling mechanism and improved wiper blades. 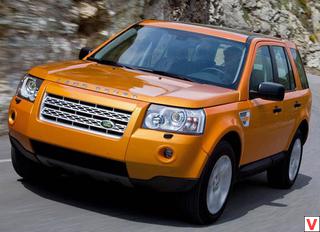 The engine, mounted on the updated model through improved hydraulic supports, and suspensions (front and rear McPherson with powerful longitudinal and transverse forged levers) are mounted on a powerful subframe for additional strengthening of the structure and getting rid of unwanted vibrations. The front suspension is equipped with a powerful anti-roll bar, which improves road handling, and relatively large suspension moves (180 mm at the front and 239 mm at the rear) provide a good cross. Improving the off-road qualities of the updated Freelander also contributes to the new transmission system with an intermediate reduction gear (IRD).

This system is simpler and cheaper than the demultiplicator, but it can help when starting on sand, dirt and other similar surfaces, as well as uphill. Russia offers four basic configurations for semi-cabriolets (E, S, SE and Sport) and five for 5-door off-road vehicles (E, S, SE, HSE and Sport). The basic equipment of the 5-door version includes front and side airbags, central locking, adjustable lumbar support for the front seats, a 40x60 folding rear seat, electric windows and mirrors, a stereo with a CD player, an adjustable steering column and more. 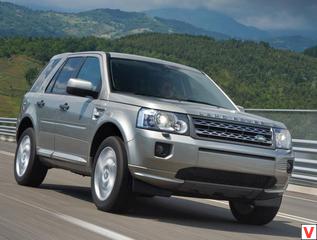 The most luxurious is the modification of the HSE (only for the 5-door version) with leather (or a choice of Alcantara / leather) trim seats, electric sunroof, air conditioning, heated front seats, parking sensors, fog lights and high-quality audio system harrnan / kardonTM with 8 speakers and CD changer. The second generation Freelander was presented in July 2006 at the motor show in London. For Europe, the usual name of the model was kept. In North America, the car began to be sold under the name LR2.

Unlike previous models, Freelander 2 is produced in Halwood (a city near Liverpool). Fully updated range of power units. In the arsenal of Land Rover Freelander 2.2-liter turbodiesel jointly developed by Ford and PSA with a capacity of 160 hp and developed by Volvo inline 6-cylinder gasoline engine of 3.2 liters and a power of 233 hp Both engines are aggregated with a 6-band automatic transmission, and buyers of diesel engines can also purchase a version with a 6-speed manual transmission. Land Rover Freelander 2 received a maximum rating of five stars in the European program to evaluate new cars for the level of safety of adult passengers. 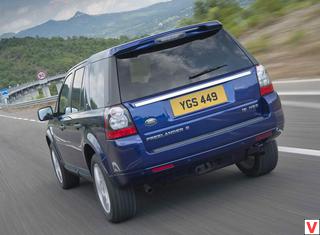 He also earned four stars in the category "child safety". In 2010, Freelander 2 has undergone a restyling. Externally, the car has changed minimally.

The radiator grille has two trim options - dark for the TD4 model (150 hp) and brilliant for the options with a gasoline engine and a 190 hp diesel engine. The updated Freelander 2 also received a new front bumper, halogen headlights, new taillights, which received transparent diffusers with black edging, light alloy wheels of the new design and new exterior colors. It is noteworthy that the handle of the tailgate is now painted in body color. The car added a width of 95 mm (2005 mm). The length (4500), height (1740) and wheelbase (2660) have not changed.

The clearance is 210 mm, the angles of entry and exit are 31 and 34 °, respectively, the depth of ford crossing is 500 mm. The area of ​​the side mirrors, according to the British, increased by 10%. Another change relates to the Land Rover logo, the color of which is changed from gold on a green background to a more modern bright silver on a green background. Changes in the interior are also purely symbolic.

Preserved and high, "captain" landing on a chair with a short pillow, and excellent visibility. Changed only the finishes and the instrument panel. There are four seat trim options: fabric, Napoli leather, improved Windsor leather, which is only available when ordering the Premium Pack option, as well as a combination of leather and alcantara upholstery. The Premium Pack is a new equipment package that, in addition to leather upholstery, includes electrically adjustable seats on 8/6 parameters, floor mats and a central tunnel carpet, and much more. The most important update is under the hood. In the new model year, Freelander 2 received new engines.

All this was done in favor of reducing emissions of carbon dioxide engines, as well as reducing fuel consumption. The 2.2-liter sixteen-valve turbodiesel was seriously upgraded. It was equipped with a new turbocharger with variable geometry, which, thanks to liquid cooling, is capable of operating at higher temperatures. An optimized injection system and new software allowed the engine to fit into Euro-5 standards. Previously, the power of this motor was 160 hp, and now you can choose from two options forcing - 150 hp (for TD4 version) or 190 hp (for version SD4). The torque slightly increased from 400 to 420 N • m.

On top of that, if before the engine worked, including on fuel with a 5% biodiesel content, now it can also work on 10%. To reduce the noise level, the crankcase is equipped with a sound-absorbing casing, a rubber pad was installed under the top decorative cover of the diesel engine, and a modified front cover of the gas distribution mechanism appeared. All this has reduced the noise by 2 dB. The TD4 version is offered with an improved six-speed manual gearbox with a Stop / Start function as standard equipment, while the SD4 with a 190 hp engine. Only available with a six-speed automatic transmission.

The introduction of the start / stop system required the installation of a dual-mass flywheel, an improved starter and a bi-directional crankshaft position sensor, which reduced the engine start-up time from 0.9 to 0.7 s. The minimum temperature at which the system operates is reduced from four degrees to zero. The petrol 3.2-liter engine now meets Euro-5 requirements for pollutant emissions, however, the maximum power and maximum torque remained unchanged - 233 hp. and 317 Nm. The inline "six" accelerates Freelander 2 to 100 km / h in 8.4 seconds and allows you to develop a maximum speed of 200 km / h. 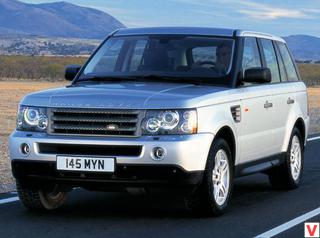 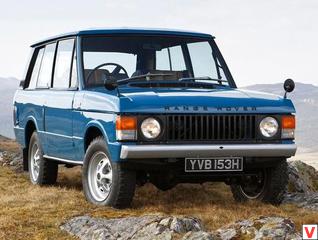 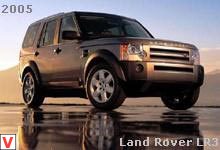 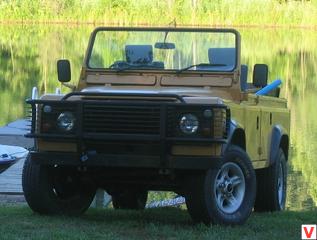