The concept of VehiCross first appeared before the public at the Tokyo Motor Show in the fall of 1993. Unusual Isuzu avant-garde appearance of the car can be explained by the fact that he created his English designer Simon Cox. The merit of the Japanese company is that it listened to the enthusiastic reviews of visitors and, not being afraid of the revolutionary appearance of VehiCross, decided to launch it into production - almost unchanged. The first production cars went on sale in Japan in the spring of 1997. The symbolic name of this SUV in Russian sounds like "V-cross" (Cross means "to move", "to cross").

The car is fully consistent with its name, this is evidenced by the ease with which he “moves” from asphalt to off-road and back. VehiCross is a symbiosis of a full-fledged off-road chassis, corresponding to the international classification of T1, and fascinating with its body shape. Its exterior is so unusual that it is hard to believe that this is a production version, and not a sample of the automotive style of the future. Dynamic contours of the body with "twisted" front pillars of the roof and narrow side windows are more typical for a sports coupe. On the hood of a complex shape there is a black inset, it does not give reflections that could blind the driver. 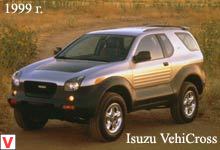 Powerful plastic panels (polypropylene painted in bulk) encircling the entire lower part of the car and forming its “nose” and “stern” are not decorative trim moldings. The panels form the lower part of the body, the metal (galvanized steel) ends in centimeters in five below the upper edge of the plastic. Good decision: in the case of minor damages received on the roads or when parking, plastic elements can be easily replaced without straightening the body. The panels are made of special plastic, they are not afraid of scratches and cracks, they replace the metal just in those places that suffer the most from damage and corrosion. 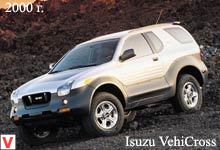 And finally, the pinnacle of originality - the spare wheel cover in the rear door. First, it is a catchy stylistic element, thanks to which the car is remembered from behind, as well as from the front. Secondly, the reserve is always clean.

And thirdly, it can be removed only by opening the door, thus, the problem of the safety of the reserve is solved. By the way, the reserve is not fully balanced. VehiCross is built on the chassis of the “short” version of Trooper and, therefore, has a frame structure typical of off-road vehicles. A powerful spar frame carries the engine in a block with a transmission, front torsion bar suspension and a rigid rear beam on two unusually long longitudinal longitudinal links and one short upper link. The front anti-roll bar has a diameter greater than 25 mm.

The springs of the rear suspension - with a progressive characteristic, sports gas-filled shock absorbers are equipped with remote tanks, which dissipate heat well. The company declares that such on serial cars were not applied earlier. Under the hood, a 3.5-liter V-shaped “six” is installed longitudinally - vehicles for the American market are completed with this engine. The power unit develops power of 215 hp (5400 rpm) and 310 Nm of torque (over 3000 rpm). An additional damper is installed in the intake manifold, which opens, making it easier for the engine to breathe, as soon as the engine turns over the 3600.

The engine and four-speed automatic transmission were originally developed for the Isuzu Trooper, which is 200 kg heavier. VehiCross "default" rear-wheel drive car or almost rear-wheel drive, and the full is provided "on demand". Approximately so can translate Torgue-on-Demand (TOD) - the name of the system that provides Isuzu set of off-road qualities.

The task of TOD is the redistribution of traction from the engine between the front and rear wheels. A special computer every 20 milliseconds reads information from numerous sensors that monitor the speed of rotation of the front and rear differentials, the position of the throttle, the activity of the brakes and ABS. TOD is activated at the same time as the engine is turned on and off along with the ignition. The driver does not take part in this process and can only observe his work - for this a special icon is located on the left of the instrument panel.

The rectangles of the front wheels are divided into three equal parts. While they are all dark, the front wheels account for a maximum of 15% of the engine effort. One-third turns green - the VehiCross has become all-wheel drive by 30%, two-thirds by 30–50%. The pictogram of the front wheels, which is completely filled with green, means 50:50 all-wheel drive mode and gives the green light to the assault on a serious off-road. The TOD system is controlled by a special computer, which is busy processing only this information and is not associated with the control unit for other functions.

In his "brains" there is a lot of information about any road conditions that could potentially meet on the driver's path, and in the very 20 milliseconds he will select the optimum mode of rotation of the wheels. Salon VehiСROSS does not disappoint. The seats, door upholstery and comfortable four-spoke steering wheel are trimmed with red and black leather - very beautiful, although not new. Bucket front seats are very comfortable - they are quite tough and securely fix the seated.

The seat is adjustable "manually" - in length and in angle of inclination of the back, but this is quite enough. Properly positioned hands on the steering wheel helps adjustable steering column. The only thing that doesn’t fit in perfectly with the look of the concept car is the standard dashboard from Isuzu Rodeo.

Although driving a car as usual, and not using an extravagant algorithm is much more convenient. In the car is very originally arranged back space. There are more places there than in some jeeps. In addition, the adjustment of the backrest is provided. It's comfortable.

But to admire the surroundings through two small windows on the back of the couch is problematic, with a normal relaxed landing in front of the eyes of the rear passenger is a massive rear pillar. It should also be recognized that VehiCross cannot boast of good visibility. The rear window turned out quite small, and the driver will have to navigate through the mirrors. Alternatively, you can consider the Japanese equipment, there is a rear-view camera that feeds the image to the screen on the front console. Unfortunately, this luxury is not provided for the USA and Europe, but the problem can be solved by installing parking sensors, which make things a little easier.

Isuzu VehiCross is a real, serious SUV. Both in terms of terrain, and in terms of the ability to move over rough terrain at high speed, and without fear of shock absorbers. The latter confirms the construction of single-tube gas shock absorbers - with an additional external camera, these are usually used only on serious sports cars. The same applies to the brakes.

Ventilated wheels on all four wheels are not often found on cars of this class, and here they do an excellent job. 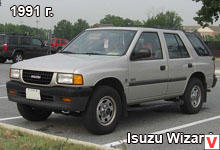 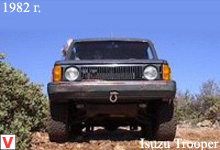 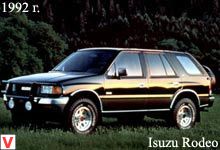 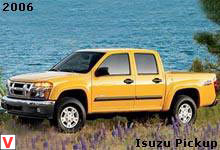 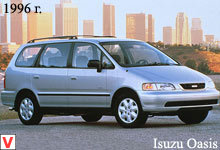 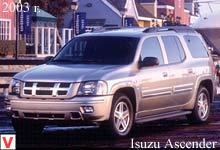