The story of Infiniti FX began in 2001, when its first prototype appeared. The second prototype debuted in 2002 and was as close as possible to the serial version, the world premiere of which was held in January 2003 at the Detroit auto show. The car is designed on the platform of FM, which was used when creating the Infiniti G35 and Nissan Skyline. Infiniti FX is a typical SUV (Sport Utility Vehicle). The car of the increased passability and capacity for the people leading active lifestyle. Short overhangs, a heavily tilted windshield and narrow side windows give the exterior an FX resemblance to a sports car. 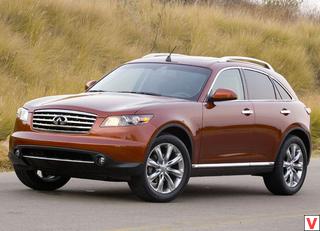 As well as narrow windows, thick pillars, a tall and massive tunnel, a sporty little steering wheel, aluminum trim, automatic transmission lever and pedals. The FX Salon gives you a sense of well-thought-out functionality and luxury. The center console is decorated with branded analogue clocks with a quartz movement, the dashboard is decorated with chronometer-style dials with chrome-plated headbands. The instrument panel is made in the form of a separate unit, which is regulated by the angle of inclination along with the steering column using a memory drive. Worthy of attention and energetic appearance multifunctional steering wheel with three spokes.

Electric drives for seats, mirrors and side power windows are standard, as are climate control and a Bose audio system with a six-disc changer, a cassette player and 13 speakers. The Infiniti FX series consists of two models. The FX35 is equipped with a 3.5-liter V-shaped six liter capacity of 280 hp. The engine has an aluminum block, four valves per cylinder, pistons with a molybdenum coating and a system of smooth valve timing. FX45, in accordance with the index, has a 4.5-liter V8 engine with titanium valves and a variable valve timing system, which produces 315 hp. Both engines provide powerful and confident acceleration, as well as a stock of traction at any speed. 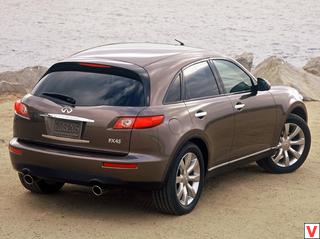 They are aggregated with the same gearbox - hydromechanical five-speed “automatic” with the ability to manually select gears. Permanent drive here to the rear axle. The base Infiniti FX35 has a rear-wheel drive, and as an option it is equipped with an all-wheel drive transmission with an ATTESA E-TS electronic “distributor” of thrust, which is already “standard” on the FX45.

ATTESA E-TS Advanced Total Traction Engineering System for All-Electronic Torque Split, something like an “advanced all-wheel drive system with fully electronic torque distribution.” Under normal conditions, the entire moment is transmitted to the rear axle, and when the driving wheels slip, the front ones are connected using an electromagnetic clutch, so that the ratio of the torque along the axes can be reduced to a ratio of 50:50. If desired, the four-wheel drive can also be switched on by force - using the button on the instrument panel, but this mode works at speeds up to 30 km / h. Suspension design is common for this class of car: the front - MacPherson, and the rear multi-link. 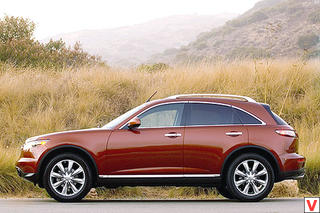 In addition to the usual, you can order a sports suspension. The brakes on all wheels - ventilated disc. Since 2005, Infiniti FX cars began to be equipped, as standard, with a warning system for leaving the highway. These models will have an electronic unit in the area of ​​the rear-view mirror that will track the road markings. And as soon as the car starts to go off the track, the system will give a warning signal. In 2009, Infiniti FX was updated, but remained 100% recognizable. The car has retained the lines and proportions of its predecessor, which are so popular with the public: short overhangs, long hood, low roof, high “belt”, massive food and huge wheel arches of impressive size.

In short, FX 2009 retained all the basic forms of its predecessor, increasing the track width by 43 mm and extending the wheelbase by 35 mm. There are second-generation Infiniti FX35 / FX50 and more vivid signs of an update. For example, modified front optics, a black grille with wavy longitudinal stripes and diffusers on the front fenders, which exhaust air from the engine compartment and the side parts of the car, reducing the frontal lift force by 5% and improving the stability of the car when driving at high speed. To adjust the direction of air flow, the shape of the front bumper and rear lights was changed, as well as the angle of the spoiler on the tailgate. 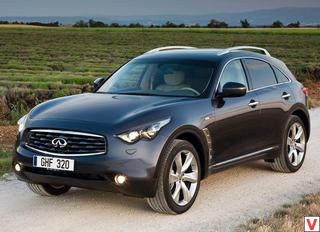 The drag coefficient dropped from 0.37 to 0.36 / 0.35 (FX35 / 50). Finishing materials of the highest quality. Management pleases with logical ergonomics and intuitive simplicity, the abundance of diverse technologies delights the breadth of taste.

For example, the Welcome Lighting lighting system - which, as the owner approaches the car, lights up the backlight in the exterior mirror at the front and in the legs, and then lights up and the backlight of the engine start button begins to pulsate. Infiniti FX comes in two versions - FX35 and FX50. The Infiniti FX35 version is equipped with a modified 3.5 liter V6 (307 hp and 355 Nm), providing the car with the same acceleration as the V8 of the previous Infiniti FX45. The crossover reaches a speed of 100 km / h in just 6.9 seconds. In the second modification, a 5.0-liter V8 engine is installed, which develops a capacity of 400 liters. from. and the moment in 500 Nm. 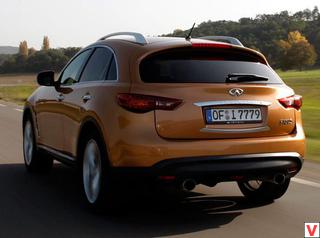 With it, the FX50 accelerates to 100 km / h in 5.8 seconds. All versions are offered with a new 7-speed automatic transmission with a system of smooth gear shifting and sport mode. The four-wheel independent suspension is recalibrated (twin wishbones in the front and a multi-link rear suspension), extensive use on FX, from suspension to doors, aluminum, reduced the total weight of the car by 400 pounds. To combat the tough ride, which caused the owners of early FX to complain, Infiniti installed the CDC system (electronic continuous damping control system), which allows the driver to choose the Auto or Sport system, switching between soft and hard suspension behavior.

Standard on the FX35 are 18-inch wheels with five spokes, the same, in addition, there are 21-inch lightweight wheels Enkeis, dressed in summer tires 265 / 45R21 with improved performance (only for FX50). Infiniti FX is an SUV with a very memorable appearance. "Cosmic" design in combination with advanced equipment embody the most cherished and courageous desires of the creators. Infiniti FX is not only a great dynamic performance, but also a special atmosphere of luxury for the driver and passengers. In 2012, the second generation Infiniti FX experienced an easy restyling. The front of the car has undergone a small plastic surgery. 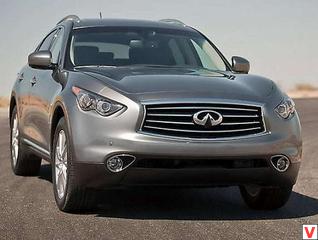 The updated version is distinguished from its predecessor by a larger trapezoid-shaped grille, a modified front bumper and a teardrop-shaped edging of fog lamps. Slightly modified interior. On the updated dashboard, there are white instrument arrows and a black and white display instead of an orange one. It was possible to order a black ceiling finish (previously only light was available), which is good for harmony in a black leather interior. The trunk volume is only 410 liters, and the loading height, on the contrary, is large.

When folded rear backrest floor turns out smooth, but with a slight inclination. The roof of the Infiniti FX50 has got a rail for attaching the trunk. Until 2012, Infiniti FX was represented in Russia only with gasoline engines. However, from the new model year on the Russian market appeared diesel modification Infiniti FX30 equipped with a V6 engine of 3.0 liters (238 hp). With this motor, the car accelerates from 0 to 100 km / h in 8.3 seconds. Which fully confirms the status of the FX as a sports crossover.

Average fuel consumption - 9 liters. The rest of the power unit line is still represented by a 3.5-liter “six” and a 5.0-liter “eight” with a capacity of 400 hp. The engines are paired with a seven-speed automatic transmission. Changes occurred not only in appearance, and in the power plant, the car also received additional options to significantly increase the security system and facilitate control. Of the security systems installed on the Infiniti 2012 model range, you can select intelligent cruise control, which allows minimizing the participation of the driver in driving.

This system itself, with appropriate settings, is able to slow down the machine, when an obstacle appears in its field of view and to resume movement in the absence of it. The system of circular view allows you to track the situation around the car. With its help, you can easily park the car even in the narrowest place. Electronic brake force distribution provides effective braking on the road with any surface.