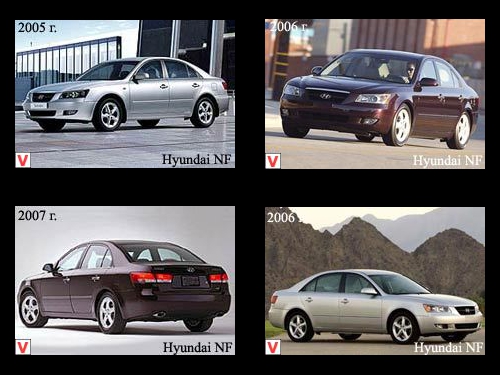 Hyundai Sonata can already be called a veteran of the Russian market. Therefore, in the Korean General Staff, it was decided to launch a more modern model on the market. The unique name of the beginner - NF - not only as the factory auto index, saved for Russia, so as not to be confused with its predecessor. Sonata remained in production in Taganrog, while NF is imported from Korea. In most markets, the former name Sonata has been preserved. The debut took place at the Paris Motor Show in 2004. Hyundai NF continues the tradition of Sonata, but is very different from the relative. The car was created almost from scratch.

The taillights and trunk lines are made in the best traditions of Volkswagen and Audi, the angularity of the profile compels itself to be respected, and only the bonnet and grille preserved Korean features. Hyundai designers managed to create a recognizable and impetuous look. The elegance of the front end of the body is underlined by a stylish grille with one central crossbar. The image is complemented by resolute lines of the hood and narrow headlights that combine all the lighting engineering in one block.

17-inch wheels, successfully combined with protruding arches, chrome door handles and protective molding integrated into the body panels of the doors form the refined, energetic NF style. Classic proportions harmoniously unite the front and rear parts of the body. The car is 55 mm longer than the Sonata V, and its wheelbase is increased by 30 mm. This resizing allowed the salon to be truly spacious. The legroom of the front passengers increased by 10 mm, and the rear - by as much as 30 mm, while the space above the heads increased by 22 and 15 mm, respectively. All these millimeters will allow five passengers taller than average to feel at ease in the cabin.

The creators of Hyundai NF have thought over the device of the car to the smallest detail, giving the driver and passengers a sense of comfort. Two-color combination of decoration used in the design, emphasizes the modern look of the car. If you evaluate the interior from an ergonomic point of view, it is definitely convenient. Onboard systems controls are located exactly where the driver expects to find them. Stereo control is located on the steering wheel, the gear lever is convenient and easy to use. Soft plastic on the front. Light skin and carpets look nice and visually make the interior even more. 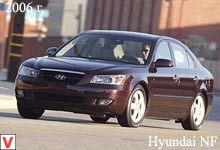 The steering column, adjustable in two planes, side mirrors with electric drive and heating, three-jet windshield washers will help to get real driving pleasure. But the electric adjustment of the front seats, unfortunately, is missing. Moving longitudinally, vertically and horizontally must be "manually".

Additional amenities include 12V sockets in the front panel and trunk, electric opening of the fuel tank cap, lights for the engine compartment, trunk, cosmetic mirrors and ignition lock. A deep glove box, convenient door pockets, as well as the convenient location of the cup holders will allow the driver and passengers not to worry about placing things in the cabin. Moreover, to increase the volume of the already not small trunk (430 liters), the backs of the rear seat can be folded in parts. To save the driver and passengers from extraneous sounds, the car has side windows of greater thickness. As a result, Hyundai NF has record low noise levels both at idle and in motion.

The previous generation of the car has established itself as one of the safest middle-class cars. Hyundai NF has not lagged behind the ancestor. Through repeated crash tests and calculations of computer simulators, the deformation zones and impact energy absorption trajectories were optimized. A robust body structure designed on a computer is reinforced with stiffening ribs, struts and special side impact protection. In addition to this, the car has a number of passive safety features: front and side airbags with reduced kinetic energy, front and rear curtain airbags.

The front passenger and driver are protected by active head restraints and three-point seat belts, in front with double pretensioners and maximum chest load limiters. By the way, passenger cushions can be deactivated with a special key in the glove compartment of the car. The traffic situation is always under the control of the NF driver: a standard 4-channel anti-lock system (ABS) with electronic brake-force distribution between the axles (EBD). Additionally, brake assist (BA) and course stability (ESP) systems as well as traction control (TCS) systems can be installed.

Under the hood of the car is installed a 4-cylinder petrol engine of 2.4 liter Theta series developed for the NF, which develops 161 hp at its peak. The power unit is equipped with CVVT variable valve timing system, which guarantees decent “pick-up” in a wide range of revolutions. With him, the acceleration of a 1.5-ton sedan to a hundred takes 8.8 seconds - a good indicator for a middle-class car with a hint of representativeness. However, such dynamics can be achieved only by disabling the ESP motion stabilization system and switching to manual gear shifting. Topping the line of engines is a 3.3-liter 233-horsepower gasoline engine of the Lambda series.

This engine is equipped with a new five-speed automatic transmission H-matic, while the 2.4-liter version - a five-speed mechanics or four-speed "automatic". Engine housings are made of aluminum, the gas distribution mechanism with variable phases and (on Lambda) variable geometry intake system is used. With quite good dynamic characteristics, powerful brakes are perfectly combined. NF slows down quickly, and pedal effort can be easily dispensed. The front suspension retained the scheme from the Sonata, with double wishbones spaced apart in height, but significantly changed, and the combined lower arms received lighter (aluminum) end pieces. 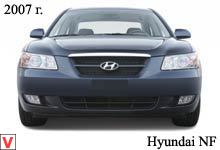 Double-lever rear suspension gave way to multi-link with the effect of the steering. As an option, offer Active Geometry Control Suspension AGCS - a system of active geometry control. In turning, electric drives change the toe-in of the rear wheels - from negative at low speeds to significant positive at high. In the first case, to reduce the turning radius, in the second - to reduce lead and better stability.

Hyundai NF is a modern, high-quality, safe car with a stylish European design, a high level of comfort and excellent technical characteristics. The NF sedan is distinguished by its excellent build quality and high level of safety. In 2008, the model has undergone a restyling. The grille has become larger and more elegant, updated bumpers and optics. Inside the changes were even greater. Instead of the old two-story console - new.

The ashtray and cigarette lighter are hidden under the lid, the buttons are logically grouped. A deep compartment for small things appeared right on the center console. Green lights gave way to blue. Even the steering wheel has been updated and made more convenient. The line of units varies depending on the market for the model. Of the four existing engines, two became available to Russians: the upgraded two-liter Theta produces 152 hp. against 145 hp the predecessor and the 2.4-liter Theta II 174 hp Overboard remained turbo diesel CRDi 2.0 and 3.3-liter V6.

The base engine is paired with a 5-speed manual transmission or a 4-range automatic. The motor is more powerful equipped with automatic transmission on 5 ranges. The sixth generation Hyundai Sonata was introduced in 2010. 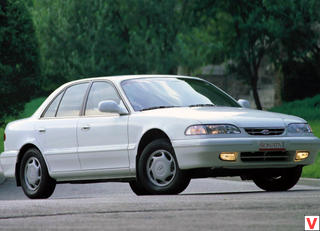 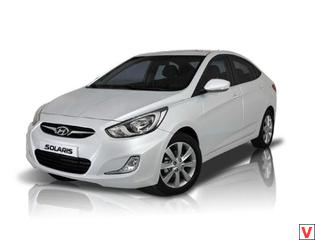 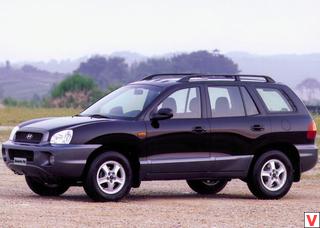 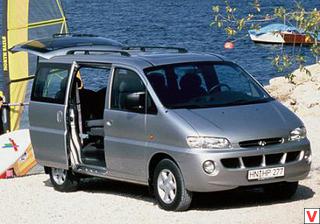 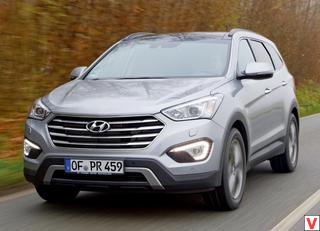