In 2003, Los Angeles, General Motors Corporation introduced the compact concept Hummer H3T, built on the Chevrolet Colorado / TrailBlazer platform. The concept was distinguished by a soft folding roof, a pick-up body that opens on three sides, Nike trim and all-wheel drive, which is included only when necessary. The undercarriage is based on a supporting frame with a front torsion bar and a rear multi-link suspension, the cab and the cargo body are made as one unit to increase the rigidity of the structure. The exterior remains the same deliberately rude. Flat body panels, square cab, huge headlights and rectangular grille clearly indicate the Hummer brand.

Dimensions of the car: 4.44 m in length, 1.89 in width and 1.79 in height. Hummer H3T demonstrates an unusual approach to the design of the pickup. Double car. It has a soft, detachable soft-top roof. 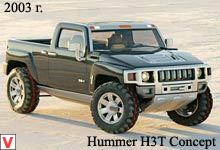 In the body there are side doors imperceptible at first glance, consisting of two halves - the upper one, which opens sideways, and the lower one, which is thrown back downwards and turns into a comfortable step. Thanks to these doors, it is much more convenient to use a spacious cargo platform - there is no need to make your way through the whole body to the things lying directly behind the cabin. Sealed folding tool boxes are built into the cargo compartment side walls. The tailgate leans back, forming a single plane with the bottom of the body.

The courageous appearance of the military machine was largely preserved, but at the same time a certain youthful playfulness appeared in the Hummer H3T appearance. Just look at the rubber in which the car is shod, with its red accents and fancy tread pattern. This is the result of GM’s collaboration with Nike and BFGoodrich. 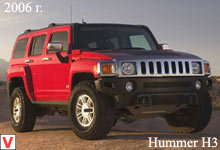 In addition to its technology, Nike gave the concept a special thermal insulation material Sphere, which is covered with seats. Nike's interior is distinguished by upholstering two tones with bright red accents, red instrument lighting, chrome-plated dial trim, a wide color display on the center console and climate control. Under the hood, the H3T is a 350-horsepower, five-cylinder, 3.5-liter engine equipped with a turbocharger. Its torque is 474 Nm at 3600 rpm. Transmission - automatic four-speed HydraMatic 4L65-E 4. When the car went into series, the letter from the index disappeared, and just H3 remained. In the production range of the Hummer H3 Corporation appeared in 2005.

Conceptual pickup has given way to the usual closed body. SUV is going to the American plant in Shreveport (Louisiana). According to the American classification, the “third” Hummer belongs to mid-size off-road vehicles - it is 40 cm shorter, 16 cm narrower and 15 cm lower than the Hummer H2. Despite the reduction in size, the H3 remains a full-fledged SUV with excellent maneuverability inherent in all models of this brand. At the heart of the car: durable steel modular frame, independent torsion bar front suspension and spring dependent rear, disc brakes on all wheels with ABS, all-wheel drive transmission with a plug-in front axle, reduction gear and self-locking rear differential. 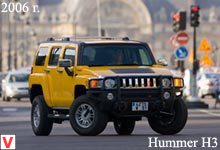 Designers remained true to the "military" style - H3 is 100% recognizable. The salon has a completely traditional "passenger" interior. In addition to the luxurious interior SUV boasts a spacious trunk of 835 liters or 1,577 liters with the rear seat folded. All versions (Base, Adventure and Luxury) equip only with one petrol 5-cylinder 3.5-liter engine with a capacity of 220 hp with variable valve timing. This power unit allows you to accelerate the 2.1-ton car on the highway along with other road users and overcome serious off-road. On the H3 version for Europe, they will install an optional 3.0 liter R4 CR turbo diesel (130 hp 280 Nm).

Basic equipment is equipped with a 5-speed manual gearbox. Optionally offered 4-step "automatic". Now preparing for the debut is another version of H3, which will be named Alpha. The development of this modification was actively involved experts GM Performance Center. In addition, the Hummer H3 Alpha upgraded chassis, which had to be adapted for the installation of a larger engine, reconfigured steering and suspension, as well as enhanced all-wheel drive transmission. The presence of a larger and heavier engine off-road performance of the Hummer H3 did not affect. 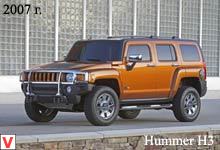 The car can still overcome fords to a depth of 610 millimeters, as well as climb obstacles up to 407 millimeters. The maximum ground clearance of an SUV is 231 millimeters, and the angle of entry is 39 degrees. 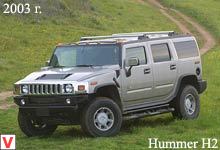 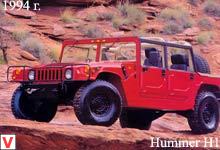