The release of S2000 was dedicated to the 50th anniversary of the company. The car is based on the conceptual design of the Honda SSM. The appearance of this car is fully consistent with the ideas of a dream car: arrow-shaped, with a huge hood and a powerful profile of the wheel arches, a small clearance, huge wheels. Inside, attention is primarily attracted by the huge red Start Engine button, which starts the engine after turning the key in the ignition lock. A convertible with a raised top always looks spectacular and attractive. The awning is controlled by a servomechanism, which is included only in full statics and with the parking brake lever raised.

True, there is one nuance, the need to get out of the trunk and manually adjust the lid covering the compartment where the roof itself is hiding. Salon S2000 performed in the best traditions of dream cars, where in their rightful places are: a small steering wheel with a leather rim, perforated, made in the purely sporty style pedals, and a titanium knob gearshift lever. On the dashboard stand out the red eye of the digital speedometer and tachometer, the orange divisions of which pulsate in time with the engine. The elasticity and consistency of the engine and 6-speed gearbox is so high that all this is easily done in third gear.

For better control and full control over the road creators have made every effort. For example, instead of the traditional hydraulic, they equipped the S2000 with an electric power steering. Having made the engine as easy as possible due to the use of light alloys, composite materials and the newest plastics, they placed it almost at the center of the base, behind the front axle, thereby achieving 50% weight distribution along the axes, thereby improving stability and controllability. Powerful and lightweight integrated in the body of the X-shaped frame with cast aluminum elements provides body rigidity.

At the same time on the S2000 applied light progressive lightweight and compact suspension. The heart of the S2000 is Honda’s latest high-tech achievement. The unit is an aluminum block, magnesium head, racing aluminum pistons and a three-stage VTEC system of the latest generation. The two-liter 240-horsepower engine provides the Honda S2000 with a fiery temperament (acceleration to 100 km / h in six seconds, maximum speed - 250 km / h).

Engine Honda S2000 - four-cylinder, sixteen-valve, has variable valve timing. Despite the high power, the car meets the environmental standards of 2000, adopted in Europe and the USA. Contrary to the assumption that such a high-speed engine will create discomfort at extremely low speeds, it behaves extremely appeasable. This is greatly facilitated by very light pedals, precision brakes and unique gear changes with literally millimeter handles, resembling a computer joystick.

Based on the rule - everything that has been worked out conscientiously can be improved to infinity, the tuning specialists of the Giacuzzo studio managed to bring into the S2000 look some small, but quite original and creative changes. For example, the serial rims were replaced with spectacular and lightweight Emotion-Line wheels, the surface of which was polished by hand. Giacuzzo offers an adjustable suspension for the Honda S2000, allowing you to change the amount of ground clearance in the range of up to 60 mm. A more simple version of the modification is the installation of new suspension springs that lower the body of the roadster by 35 mm.

Giacuzzo worked on the exhaust sound, which is the most important component of the image of a sports car. On the Honda S2000, the Giacuzzo Masters propose to install a stainless steel muffler with two impressive 90mm exhaust pipes, giving the “throat” of the roadster a pleasant sound for connoisseurs. The model of 2003 differs, first of all, slightly "corrected" for the sake of sportiness by its appearance - the shape of the front and headlights has changed.

Thanks to the use of new front lamps with three light sources, the luminous flux increased. The modified shape of the rear bumper and two oval chrome-plated exhaust tips visually added dynamism to the roadster. Changed the shape of the door panel, thanks to which the space at the level of the elbows and shoulders of the front passengers increased by 20 mm. The S2000 comes standard with a leather gearshift grip, as well as trimmed with polished aluminum inserts in the siderests side panels, an audio system and a center console. A new compartment for storing small items between the seats and two cupholders are closed with a sliding cover, the steering wheel is decorated with a branded emblem. 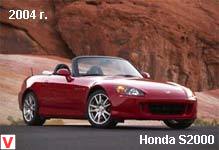 Digital displays of devices began to be better read, a clock appeared on the panel. The sports layout of the double roadster with rear-wheel drive, a powerful two-liter VTEC engine with 240 hp accelerates to “hundred” in 6.2 seconds. and develops a maximum speed of 241 km / h. The use of new carbon synchromesh on all gears, which made it possible to reduce wear, lighten weight and improve the quality of work of the gearbox as a whole. The new clutch system provides a smoother transmission of high torque from the engine to the wheels.

Now, to improve the ride quality, the S2000 is equipped with 17-inch wheels (instead of 16-inch on the previous model) with low-profile Bridgestone Potenza tires, which cling tenaciously to the road at the highest speeds. In this case, the front tires 205 / 55R16 were replaced with 215 / 45R17, and the rear tires 225 / 50R16 with 245 / 40R17. Finally, the new ABS system works even more effectively in situations where the degree of adhesion to the road surface instantly changes between different wheels. In 2004, the S2000 also waited for a light update, which for the most part affected the chassis.

Commenting on this decision of the company, Honda experts referred to customer reviews, which characterized the S2000 as a difficult and dangerous car to drive. What made Honda refine the chassis. For example, a softer rear suspension allows the rear wheels to cling to the asphalt longer, because of this, now the roadster is torn down later and softer, its behavior has become more predictable.

And the increased rigidity of the body helps to maintain and even increase driver's pleasure: a few additional crossmembers between the side members in the engine compartment, the struts between the front spring supports and the front wall of the trunk. Honda S2000 starting from the 2004 model year will be a different car.