The appearance of the Ridgeline was preceded by a conceptual full-size pickup Honda SUT, which the company demonstrated at the Detroit Auto Show in January 2004. A year later, the world saw a production version called the Ridgeline. The car was positioned as a model in 2006. Pickup is based on the GLT platform (Global Ligth Track) and unified on most components with Pilot / Odyssey. Due to the modern, aggressive design of the car stands out in the traffic flow. The main feature of the Ridgeline - body structure.

For the first time, a spar frame of box-like elements welded to the lower part of the body (integrated unibody frame) was used in pickups of this class, so that the latter can be considered both frame and carrier. The presence of crushable zones in such a frame increases the passive safety of the vehicle. Independent suspension for all wheels (MacPherson front and multi-link rear) improves handling. Four-door five-seater body Ridgeline has external dimensions 5232х1976х1786 mm. Wheelbase 3123 mm, 1701 mm track, ground clearance of 208 mm. The cargo compartment is relatively short (1524 mm), but the lack of protruding wheel arches in it makes it quite roomy. The car can lift 500 kg of cargo.

Ridgeline has a body capacity of 240 liters, which is adapted for transporting fluid. In addition, the body door is equipped with a mechanism for both folding and swing opening. It is noteworthy that under the floor of the cargo compartment there is a spacious (240 l) sealed box with a lid that holds the spare wheel and tools. The car is equipped with a 3.5-liter engine producing 255 hp. The power unit is paired with a 5-speed automatic transmission. This is one of the most economical engines for pickups of this class: Ridgeline's fuel consumption on the highway is 11.5 liters per 100 km, and in the city it does not exceed 15 liters per 100 km. 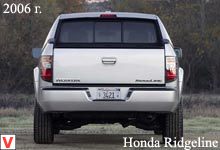 The Ridgeline is the first four-door pickup truck that received the highest rating in the crash tests of the National Highway Traffic Safety Administration (NHTSA) in frontal and side collisions. The model was the best in the tests for a coup. Ridgeline received the highest score for both indicators - both for static stability (Static Stability Factor) and dynamic (Dynamic Rollover). Honda Ridgeline - the car of the new generation, which combines all the advantages of a pickup truck and an SUV. 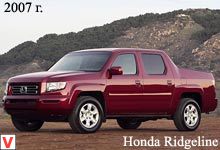 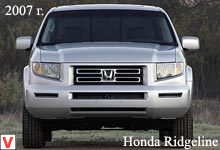