Compact (by American standards) Dodge Dart, based on the Chrysler A-body (platform-A) was produced from 1960 to 1976, although the car, with dimensions larger than the Soviet "Volga", which was produced from 1960 to 1963, called The “compact” language did not even turn around the “Yankee”. Only with the 1963 model year, the Dodge Dart decreased in size and occupied a niche of compact cars. With this model, Dodge first entered the fast-growing and promising compact-car market. Over the years, 3,700,000 vehicles have been sold. He was appreciated for reliability and endurance.

Dodge Dart earned a reputation as a “non-killing” car, and was popular both among those who like to drive (versions of Dodge Dart Sport and the powerful Dart GTS), and among respectable family Americans. From 1960 to 1966, the car was even produced in the station wagon (station wagon). Speaking about the popularity of Dodge Dart, it should be said that in many respects it was achieved due to the variety of options offered to the buyer. A choice of 2-door sedans, 4-door sedans, two-door coupe (hardtop), two-door fastbacks (Demons and Dart Sport), convertibles, and, as already noted - wagons. 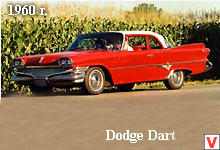 The car was originally produced in 3 levels: the basic Seneca, the average Pioneer and the luxury Phoenix. Such terminology was maintained until 1962, and after that, the car was assigned more prosaic indices, respectively: Dart 330, Dart 440, and Dodge Polara 500. A budget version of the Dart 220 was also produced, but it was sold exclusively in Canada. Now it looks ridiculous, but the compact Dodge Dart was equipped with serious engines: from 3.7 liter “six” to 7.2 liter eight-cylinder engine for sports modifications. In 1965, Chrysler Corporation developed for Dodge Dart a new version of the 5.9 liter engine with a 4-chamber carburetor, with a capacity of 235 hp.

This engine received its own name "Charger", in some markets known as Commando. These engines began to put on a Dart GT hardtop, with a body, always painted in yellow and black interior. This modification has received a new name - Dodge Dart Charger. At the end of the 60s, the fourth generation of the car became known as the Dodge Dart Swinger, and since 1970 the fifth generation is the all-Dodge Dart Demon. It took only three years for diverse Christian groups and communities to achieve the banning of this name and emblem with the devil holding a pitchfork in its hands. So - since 1973 Dart returns to the old name Swinger. 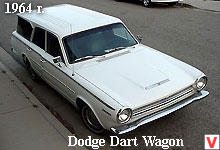 The appearance of the car changed very often, from small changes that were made almost every year to cardinal “faceliftings” for each new generation in 1962, 1963, 1967, and 1970. The car was so popular that in 1976 they began to produce the Dart A38 Police Special, as the name implies, a special option for the police with a reinforced body, a reinforced suspension, new improved brakes, and a high-capacity battery. It is worth noting that the production of "police" Dart was insignificant, these cars came to taste, mainly Californian cops in Los Angeles and Ventura County, and in the rest of the country, the servants of the law preferred Dodge Coronet and Dodge Monaco.

Like any “long-lived”, Dodge Dart was produced at many enterprises of the Chrysler automobile concern (Illinois, Michigan, California, Missouri, Delaware, Canada, Colombia), and was officially exported to many countries of the world, including Canada, Brazil, Mexico, Colombia, Spain, South Africa and Australia. In accordance with generally accepted tradition, along with Dodge Dart, the concern Chrysler produced its twin-Plymouth Valiant / Duster, which differed in minor details. In 1976, the Dodge Dart replaces the new model based on the Chrysler-F platform, which received the name Dodge Aspen. 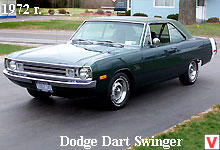 But Dodge Dart continues to produce abroad: in Brazil until 1970, in Colombia until 1977, in Argentina until 1979. 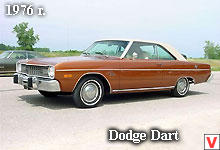