The beginning of the path of the Eado sedan can be considered April 2010, when, at the Beijing International Automotive Exhibition, Changan introduced the concept of a European-class C car - Changan C201. In preparation for mass production, the conceptual C201 was named Eado. At home in China, the car is sold from March 2012, the sedan drove to Russia in 2013. The outer dimensions of the body are 4620 mm in length, 1820 mm in width, 1490 mm in height.

The size of the wheelbase is 2660 mm. The front wheel track is 1550 mm, the rear wheel track is 1569 mm with standard 205/55 R16 tires mounted on steel or light alloy 16 wheels. Clearance - 160 mm. The weight of the car in curb condition, depending on the level of equipment varies from 1275 to 1325 kg, the fuel tank holds 52 liters. The design of this sedan was developed in the European center of the European Designing Center Changan, opened in Turin at the end of 2012. So Italian specialists worked on the exterior. 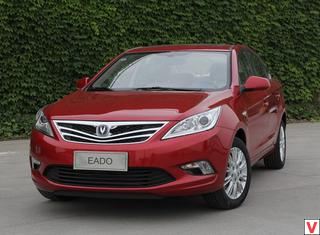 Responsible for the design is Luciano D'Ambrosio, the design department is headed by Stefano Carminati. Eado got a modern and attractive appearance. A bright feature of the front part is fashionable and stylish foglights, a false radiator grille with curved chrome stripes wrapping around the company logo.

Large, slightly elongated headlights and a wide incision of the air intake give the sedan a strict, concise and serious look. The body got a sloping hood, heavily littered front racks turning into the roof dome, elegant rear pillars flowing onto a compact trunk lid, high glazing sill, large doors, neat radii of wheel arches with stylish stamps. The back of a Chinese sedan is made up of a powerful bumper decorated with longitudinal ribs and stamps, a luggage compartment lid with a large vertical part and side lights. We should also note the low coefficient of drag Eado - 0.29. 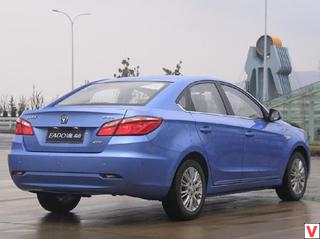 The car's interior is made simply, but with taste, with the use of two contrasting shades in the finishing of plastic. Comfortable steering wheel, instruments in three deep wells with soft bluish backlighting, stylish front panel, well-organized center console, where all the controls are located at hand. Salon cars designed for the driver and four passengers. There is enough space for comfortable accommodation in the first and second rows. Comfortable seats will delight reinforced frame and good lateral support. The sound system delivers clear and surround sound from a combination of six speakers.

The multimedia system allows you to listen to the radio and play mp3-files from disks, flash-cards and communicators via USB and AUX connectors. The useful volume of the luggage compartment is 510 liters. Under the hood is a high-performance BlueCore 1.6-liter engine capable of delivering 113 horsepower. The motor complies with Euro-4 standards and is very economical. As a transmission for this car, either a five-speed manual gearbox or a four-band automatic is offered. 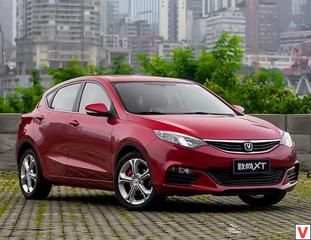 The dynamics of acceleration from 0 to 100 km / h in 12.6 (13.5) seconds, the maximum speed of 185 (175) km / h. Passport fuel consumption of 5.4 (5.9) liters while driving on the highway, 8.2 (9.4) liters in city mode and the manufacturer promises only 6.4 (7.2) liters in mixed mode. The front suspension of the Eado sedan is independent on the classic McPherson struts, and behind the archaic semi-dependent with a torsion beam, the disc brakes. In Russia, Eado is available in four trim levels, ranging from the initial Standard, to the saturated Elite.

The Luxe version is also available with two types of gearboxes and will expand equipment with an electric sunroof, heated exterior mirrors, leather-trimmed steering wheel and seats, Stability Program (ESP). The most expensive and rich equipment Elite is offered only with automatic transmission, and as chips will be added to the equipment of previous versions of the sedan advanced multimedia system with a color touch screen (music, navigation, rear view camera) and side airbags for the driver and front passenger. At the Shanghai Motor Show in April 2013, the manufacturer introduced a version of the Eado XT in the back of a hatchback, which received a stylish and sporty design.

Narrow headlights, a small grille, a large bumper, splitter, even hood, mirrors with repeaters, powerful racks - everything speaks about his sporting spirit. When viewed from the side, the large wheel arches, large doors, and ribs on the sidewalls draw attention to themselves. The back is characterized by a small tailgate, a large rear bumper, plastic protection.

Under the hood of the hatchback can be installed one of two petrol four-cylinder engines: a 1.6-liter atmospheric capacity of 125 hp and a turbocharged 1.5-liter engine producing 170 hp Moreover, the first option can be completed with both “mechanics” (5-speed) and 4-speed “automatic”. 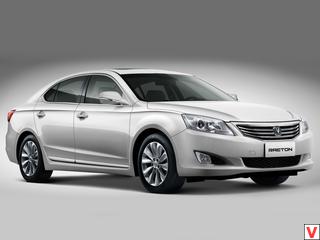 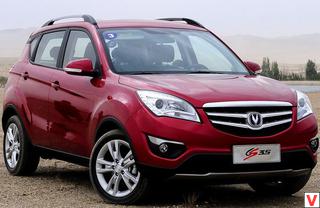