In the late 80s. In the Bugatti model range, a powerful extraordinary car appears that has nothing to do with the classic forms of the brand. The car was introduced in September 1990 at the Paris Motor Show. He received the name of the EB-110 in honor of the 110th anniversary of the birth of Ettore Bugatti. The overall layout of the car has developed a technical director Paolo Stanzani (Paolo Stanzani). He was responsible for the design of Marcello Gandini, but the main financier of the project did not like that, in its style, the car resembled too much the creations of Lamborgini. Gandini refused to redo the design, so he completed work on the exterior of the supercar Gianpaolo Bendini.

The all-new V12 engine for the EB 110 was developed by Nikola Materazzi. The volume of the engine, it was decided to limit the 3.5 liters (the same volume were then Formula 1 engines). With the help of four turbines, the V12 produced 560 hp. and accelerated the car to 336 km / h. The machine block was made of aluminum. The designers managed to achieve a low compression ratio of 7.5: 1. Bosch designed powerful brakes for this supercar, and Bugatti improved their design by supplying it with ventilated ABS. 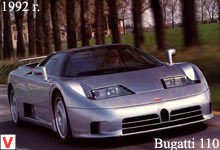 All knots and units of the car were subjected to the most severe tests. For example, the engines were tested on a chassis dynamometer at a speed of 95% of the maximum for 300 hours. And when, after 50,000 km of road tests, the aluminum chassis rigidity decreased by 20%, the Aerospatiale rocket building unit was tasked to make an EB 110 monocoque of uvolokoln. This material is extremely durable and lighter than steel or aluminum alloys. Monocoque is a system of all-wheel drive and a gearbox placed in front of the mid-engine and connected with the differentials of the front wheels by the cardan.

It is noteworthy that the transmission was developed with the participation of the company Porsche. A total of 12 prototypes were involved in the tests, while Jean-Philippe Witecock and Loris Bicocci were involved in the test work. Michelin has made for the EB 110 not only tires capable of withstanding speeds of more than 300 km / h, but also winter tires. The entrance to the salon is through high arched doors. Inside - a harmonious combination of quality leather and walnut. 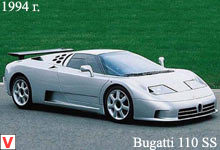 The impressive dashboard contains a clock, air conditioning, electrical programming of the reference surface and a high-quality stereo / CD tape recorder. The Vugatti EB 110 GT debuted in September 1991. There were few differences from the basic version. The changes affected mainly the interior and power unit. With an engine of 3.5 l / 559 hp This version could accelerate to 344 km / h and became the fastest production car in the world at that time. In March 1992, the 610-strong version of the EB 110 SS (Super Sport) appeared with a top speed of 351 km / h. This version often took part in sports competitions of various ranks and achieved good results.

In 1994, such a car bought himself Michael Schumacher - after he had ridden it during a supercar test, organized by a German magazine. Bugatti EB 110 was the best of the best, but his fate was unenviable: it was possible to release less than a hundred and fifty copies. In the mid-90s, the EB 110 project was doomed, demand fell every month. 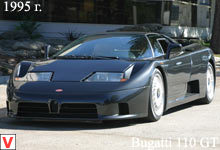