The Bristol Blenheim (603 S4) is a rear-wheel-drive, four-seater, luxury-class, hand-assembled car in the coupe, which has been produced by the British car company Bristol Cars since 1993. Initially, the company Bristol was engaged in the manufacture of aircraft, for this reason in the name of this model is saved the name of the famous British blender Blenheim. Blenheim succeeded Bristol Britannia (603). In Blenheim, the mechanical part was updated, a multipoint fuel injection system was added with higher efficiency and lower fuel consumption. In the design of the front and rear parts of the body have been made significant changes. Headlights have become a pair.

The body itself was made of aluminum and mounted on a spar frame, consisting of two longitudinal beams - spars, interconnected by crossbars. The overall dimensions of the model were as follows: length - 4,870 mm, width - 1,750 mm, height - 1,440 mm. Despite the fact that car manufacturers Bristol Blenheim of the first series abandoned the technology of turbocharging, the level of performance remained the same as that of «Brigand». Under the hood was located the same as the Bristol Britannia sixteen-valve eight-cylinder engine Chrysler Magnum V8 with a volume of 5.9 liters. 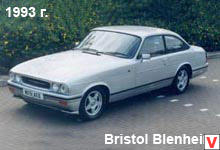 The power of such a power unit was 231 hp at 4000 rpm. Acceleration from zero to 100km / h took Bristol Blenheim 7.2 seconds, and the maximum speed was 225 km / h. The car was equipped with front and rear disc brakes. Following the first series of the Bristol Blenheim model in 1997, the second Bristol Blenheim 2 series was released, which was produced until 1999. Of the major technical changes worth noting the emergence of a four-speed automatic transmission manufactured by Chrysler.

Its appearance has reduced fuel consumption. In addition, the package was added anti-lock braking system (ABS) and power steering. Motor power has been increased to 265 hp at 4000 revolutions per minute and now acceleration from a spot to 100 km / h took at Bristol Blenheim only 6 seconds. The maximum speed of the car has increased to 252 km / h. The dimensions of the car body were slightly changed - now they were 4825x1765x1440 mm. In November 1999, the third series of the Bristol Blenheim model appeared. The power of the Bristol Blenheim 3 engine was increased to 354 hp, at 5500 revolutions per second. 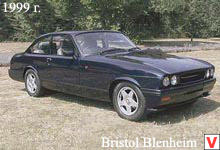 In addition, the creators of the updated “Blenheim” vertically positioned headlights, significantly updated the internal design of the body, improved the dashboard and completely altered the gear selector. In 2002, a new version of the Blenheim 3 was released, called the Blenheim 3S. The premiere was held in October at the London International Motor Show. It differed from its predecessor only in the weight and engine power that increased from 1740 to 1755 kilograms, which was raised to 390 hp, at 5500 rpm.

This allowed to reduce the acceleration time from standstill to 100 km / h to 5 seconds. The next in the Blenheim lineup was the Bristol Blenheim 3G model. This is the only currently produced model of the brand Bristol. Bristol Blenheim 3G differs from the previous version in that it can work not only on gasoline, but also on liquefied gas. Switching the fuel system from gasoline to gas and back is done automatically, by means of a computer. Because of this, the car is very economical - in terms of gasoline, it consumes only 5.6 liters per 100 km, and this is a full-size coupe weighing 1,784 kg with an eight-cylinder engine under the hood. 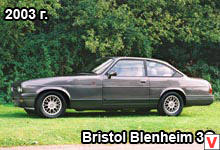