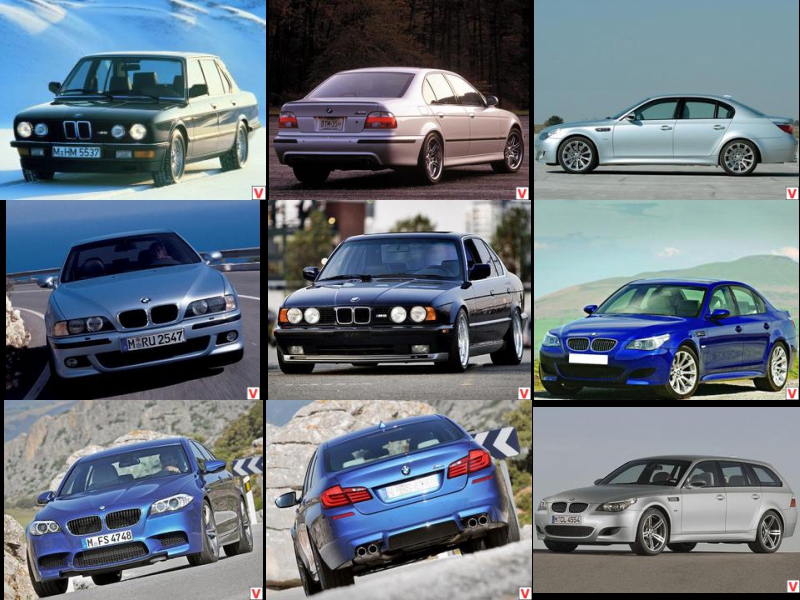 The BMW M5 is a super powerful and high-speed performance of the series 5. At the end of the seventies, the legendary BMW M1 was developed, a 277-horsepower car with a 3.5-liter six-cylinder in-line engine and four valves per cylinder. In the eighties, BMW transferred this concept to mass production - the M5 was born. At that time, BMW Motorsport GmbH was still independent and for those who wanted it, the specialists from Garching “charged” the BMW fifth-series serial sedans with more powerful engines, modifying the suspension and brakes. That is how rare BMW 533i and 535i cars were born. One of these cars was the 1979-1980 M535i, which had a 218-strong 6-cylinder 735i engine of 3.5 liters.

Approximately the same engine (M30 of 3.4 liters, but also in 218 hp) appeared in 1984 under the hood of the standard “five” E28 535i, therefore the exclusivity was temporarily lost. But in the same year, the sports model M5 made its debut on the basis of the same E28 five, equipped with a modified engine from the legendary M1 - R6 with 4 valves per cylinder and a working volume of 3453 cm3 - 286 hp at 6500 rpm and 340 Nm at 4500 rpm, which at that time was one of the highest results for engines of conventional passenger cars. The maximum speed reached 245 km / h. On the high-speed models M5, integral type designs appeared with developed spoilers and painted in the same color as the body. 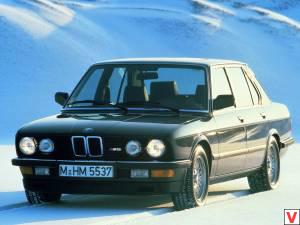 This was the first BMW M5 - a business-class sedan with the heart of a supercar, the release of which, before being discontinued in 1987, amounted to 2,241 copies. Since 1985, ABS has been standard on the 535i / M535i / M5 models and is available as an option on all models. Most of the 535 models (except those equipped with automatic transmissions) have an anti-slip system (limited slip differential) with a coefficient of 0.25. The top model of the M5 sedan with an engine capacity of 3.5 liters (315 hp) and a fuel tank increased to 90 liters appeared in January of 1989 and immediately gained popularity among lovers of “ride with the wind”.

Equipped with a five-speed manual gearbox, anti-skid system and 235/45 ZR17 tires in the front and 255/40 ZR17 tires in the rear, it became the most dynamic in its class (acceleration to hundreds in 6.3 s, the maximum speed was limited to 250 km / h). In April 1992, this engine was replaced by a more powerful 3.8-liter 327-strong, and a month later its 340-strong version M5 appeared. Emki have a great appetite for urban traffic (up to 18 l / 100 km), and when buying it is recommended to carefully check the condition and wear of complex adjustable rigid suspension and forced engines. As standard, all cars equipped with brake boosters. 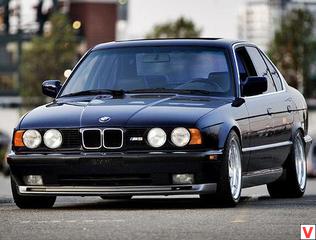 The pause lasted more than three years. And then, finally, in the fall of 1998, the Motorsport GmbH branch, departing from the six-cylinder traditions for the first time, finally revealed to the world the most powerful 5-series sedan with a E39 body and a V-shaped eight of 400 hp. - own tuning version of the car 540i. 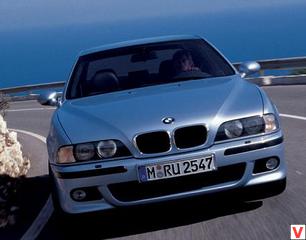 So, the glorious history of EM-Fifth has found a worthy continuation - for the first time on a BMW production model, the engine power was 400 hp, and the dynamic qualities were even better than that of the M3 - 5.3 s to 100 km / h. On this M5 is installed a forced 4.9-liter V8 engine, structurally similar to the serial 4.4-liter unit. It is equipped with the Double-VANOS system (which, depending on the engine speed and load, smoothly changes not only the inlet but also the outlet phases) and eight individual throttle valves. However, it was not just increased the working volume of the cylinders from 4.4 to 4.9 liters and forced the engine to a compression ratio of 11.0.

This required the use of oil cooling forged pistons with streams of oil from special sprayers, forged reinforced crankshaft and connecting rods, special three-layer all-metal head gaskets. The cooling system has been seriously improved - the channels in the unit and the heads have been optimized, and the pump is capable of pumping 380 liters of fluid per minute through the system at maximum engine speed. And the main technical highlight of this motor is the dry sump lubrication system, which uses one injection and two pump-out oil pumps. But in contrast to similar lubrication systems on other supercars (for example, on the Porsche 911), it uses ... 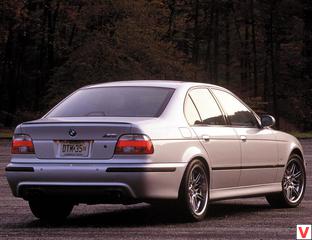 electronic control of the evacuating oil pumps! At high lateral accelerations (and the M5 is capable of developing 1.2g lateral overload on dry asphalt!), The signal from the DSC system sensors triggers solenoid valves, and the suction pumps begin to take oil from the outer sides of the crankcase, where the oil can flow under the action of inertia forces. The exhaust system - with two neutralizers, in which the carriers of the catalytic layer are not ceramic cells, as usual, but metal. And immediately after the converters, the exhaust gas flows from both rows of cylinders communicate with each other - this optimizes the pressure in the exhaust system and increases the torque at low revs.

The gearbox is only a 6-speed manual, also almost standard - there are only enhanced grip, the main pair is “shorter” and the rear limited slip differential with a 25 percent lock. All this together with the tires (front 245/40 ZR18 and 275/35 ZR18 at the rear) are perfectly chosen to help the driver to control the powerful engine even with the DSC system off, which, together with other active safety systems, is standard equipment, as well as on standard fives. And there should be no problems with electronics at all - it will also insure against drift caused by an excess of traction, and if you exceed the speed in a bend, it will help you to “turn” the car into a turn ... 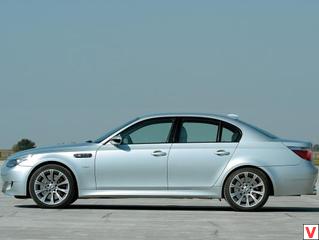 Body standard - Bavarians argue that its rigidity is more than enough even for the increased dynamic qualities of the M5. In the aluminum front suspension springs shortened by 15 mm and shock absorbers with other characteristics appeared. In the rear suspension, there are slightly more changes - the lower arms from the 540th station wagon were placed here, the springs shortened by 10 mm and stiffer shock absorbers were replaced, and some rubber-metal hinges were replaced with rigid ball joints. The fourth generation of the “charged” BMW M5 Sedan (E60) began to roll off the assembly line in 2005. The design of this generation worked Chris Bangle.

Exterior mirrors have retained their traditional shape, and the wings above the 19-inch wheels have become wider. It is impossible not to notice the large air intake and spoilers, located on the apron of the BMW M5 Sedan. For the first time, small rifled "gills" appeared on the front wings. The sly squint froze front bi-xenon headlights. As another confirmation of the sports pedigree peeps, made on the technology of "Formula 1" dual muffler. Three-color label "M" habitually located on the trunk lid. The color scheme includes three special shades - “sepang”, “silverstone II” and “intergalos” (bronze metallic, silver and azure). 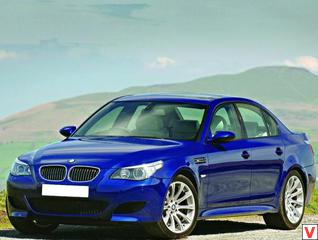 Active seats give comfort. The driver is already familiar with the IDrive system, as well as a CD player, Hi-Fi Professional audio system and a television screen. The 8-cylinder engines were replaced by 10-cylinder five-liter V10, capable of providing power in 507 liters. force and torque of 520 Nm (at 8250 rpm).

As for the speed indicators, the car is capable of speeding up to the “hundred” in 4.7 seconds, moving at a maximum speed of 250 km / h (electronically limited). For gas distribution in the V10 is responsible Double VANOS system, which changes the exhaust and intake phases during the change of revolutions and engine load. The elements inherent in race cars are the presence of individual throttle valves of cylinders and the use of ion currents in the spark plugs.

This technology allows the BMW M5 Sedan electronics to instantly diagnose detonation in each individual cylinder. Replaced not only the engine but also the gearbox. She has become a new 7-step sequential SMG, which has the function Drivelogic. 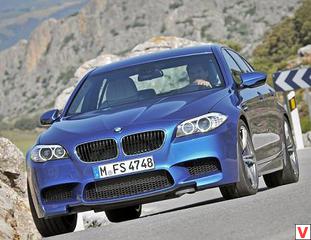 This feature helps to make the choice of transmission work programs. Shift speed in comparison with previous models increased by 20%. Transmission and Dynamic Stability Control (DSC) are integral to the engine management system, which allows them to clearly interact with each other. Built-in sensors sensitively monitor tire pressure. Dynamic stability control is exercised by the DSC system.

The electronics are responsible for locking the rear differential, and the damping rate is controlled by the EDC. The task of managing all this complex filling BMW M5 Sedan helps cope electronic interface Mdrive. In 2007, the wagon returned to the M5 line. The debut took place at the Geneva Motor Show. The luggage compartment is equipped with a “semi-automatic” curtain. The amount of luggage varies from 500 to 1650 liters. 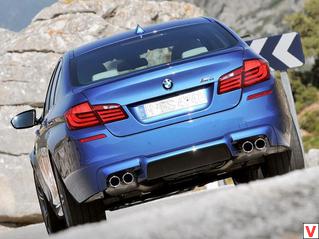 An automatic tailgate is available as an option. Glass tailgate can be opened separately. Coupling straps in the side parts, a case for large-sized items, multi-function switches, folding partition walls and a set of compartments for storage under the luggage compartment floor are included in the option package. The fifth generation M5 (F10) was presented in September 2011 at the Frankfurt Motor Show. Once again, the concern’s management decided not to produce a “charged” station wagon, as sales of the previous generation in this bodywork were low. The car is built on a new platform F10 with a wheelbase of 2964 mm.

The length of the body, compared with the previous generation, increased by 46 mm (up to 4910 mm), width - 45 mm (up to 1891 mm), and height decreased by 18 mm (up to 1451 mm). The appearance of the fifth generation, the company commissioned to develop Adrian van Heydonku, which, retaining the inherent features of the model, brought a new, more aggressive and bold appearance. The shape of the body has become more streamlined due to being located under a sharper, compared with the previous version, the angle of the front and rear pillars.

The branded "nostrils" of the grille have become much larger, the headlights have acquired the shape of a spearhead. The front bumper became more massive, a large oval central section of the air intake appeared in it, as well as large rectangular side sections. The hood, which has become wider, has acquired a different shape, and a V-shaped relief outline in the center appeared on it. A relief line appeared on the sides of the body, running from the gill-styled air ducts to the tips of the taillights.

Increased in size side doors. Aft appeared L-oraznye taillights with LED optics, different in shape trunk lid. From the bottom of the rear bumper, the central oval opening inherent in the previous generation disappeared, instead of which a trapezoid diffuser appeared. From it on both sides are placed twin exhaust pipes. The rear spoiler, located on the trunk lid, serves to optimize the car's aerodynamics. In the cabin of the fifth generation M5 also changed.

First of all, it concerns the dashboard, which received four, and not two, like the fourth generation, instrument. Moreover, now it does not connect with the center console with a set of visors. On the console itself, which has become wider, is the screen of the multimedia system. Changed the layout of the radio and climate control controls - now the "music" is on top. The central tunnel on which niches for small things and coasters are placed has also changed. The multimedia system control joystick, which was previously located behind the gearshift selector, is now on the right, on the same level with it.

The steering wheel, which found a hexagonal hub and a more dense rim, was also different. The shape of the cushions and backs of the front seats has changed, the lateral and lumbar support has increased, and the popliteal roller has acquired a rectangular shape. Increased body dimensions allowed designers to create more space for rear row passengers. Then a more comfortable sofa appeared, with an increased seat. Although it is stylistically divided into two seats, three adults can sit on it.

He is paired with a 7-speed robotized transmission with two clutches (for the American market, the engine is associated with 6-step "mechanics"). Drive car - rear. 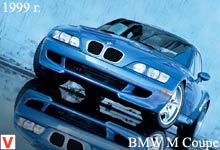 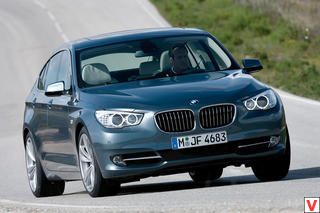 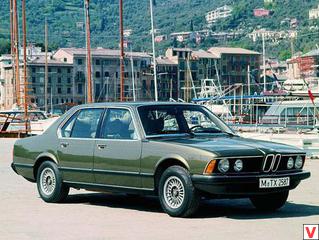