Production of the Audi RS6 (stands for Renn Sport) of the first generation began in 2002. The car is based on the Audi A6 model, can be both a sedan and a station wagon (Avant). The RS6 is the first RS model to become available in North America (USA and Canada). The creation of the car worked factory engineers and designers from the Quattro division. Black grilles and rear bumper, false exhaust pipes and minimal door linings and sills visually make the car a little lower. The interior meets a black dashboard with a speedometer, digitized to 310 km / h and the front seats of the company Recaro.

The traditional gearshift buttons on the steering wheel are replaced with the original petal keys with “+” and “-” signs. Under the hood - V-shaped "eight" with a volume of 4.2 liters, which with two turbochargers develops 450 horsepower and provides fantastic torque of 560 Nm already at 1950 rpm. According to the tests, the Audi RS6 accelerates to a speed of 100 km / h in 4.7 s (Avant in 4.9 s). The speed of 200 km / h RS6 gains in 17.6 s (Avant 17.8 s). Transmission - 5-speed "automatic" with the function of the manual mode Tiptronic. 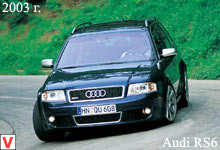 Work transmission includes the option "hill detection". It is able to respond to changes in the road surface and select the desired gear. In addition, there are more than 200 programs corresponding to different types of driving. Drive - Quattro all-wheel drive.

For the front and rear differential, a differential locking device (EDL) is used. Initially, the power generated by the engine goes to the central unit of Torsen, and then distributed between rear and front wheel drive. The front brakes include 8 pistons with a rigidly fixed caliper (4 on each side), as well as a 14.37-inch disk (1.3-inch thick) equipped with air holes. The rear brakes contain pistons with a rigid caliper (2 on each side), a parking brake mechanism and a 13.19-inch disc (0.9-inch thick). Front and rear brake discs are attached to the bushing with metal bolts. 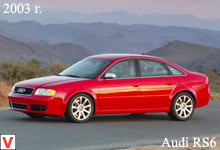 It is noteworthy that the Audi RS6 was the first model equipped with a dynamic driving control system (DRC - Dynamic Ride Control). The system consists of a pump that maintains pressure in the shock absorbers during cornering. Besides, The DRC system is able to continuously monitor each shock absorber individually in order to achieve a comfortable ride and maximum grip. Excellent dynamic performance combined with the highest level of comfort and safety. The basic equipment includes automatic climate control, an advanced BOSE audio system, a stiff sport suspension, 18-inch alloy wheels, ABS and EBD systems.

In 2004, a small number of RS6 Plus cars were produced, which differed from the usual RS6 in terms of power and some other characteristics. RS6 Plus engine power increased to 480 hp at 6000-6400 rpm The maximum speed of 280 km / h. Such indicators are achieved through a new ECU system and two additional radiators located between the intercoolers. The DRC control system and the Sports Suspension Plus sports suspension are standard on the RS6 Plus. For the RS6 Plus model, improved tires 255/35 R19 were used. The car was produced exclusively in the body Avant and was sold only in Europe. The second generation was introduced in 2007 at the Frankfurt Motor Show. 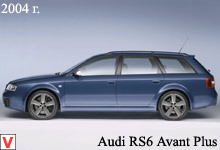 The car looks very aggressive - extended wheel arches, large wheels, predatory slots of the front bumper once again hint at the outstanding abilities of the new RS6 model. After all, under the hood, he hides a 580-hp 5.2-liter V10 engine with a pair of turbines and a maximum torque of 650 Nm. Thanks to the modified six-speed Tiptronic and all-wheel drive system with power traction on axes 40 / 60,100 100 km / h is achieved in 4.6 seconds, and 200 km / h, already for all 14.9 seconds The maximum speed according to generally accepted rules is limited to 250 km / h.

The rear bumper has also undergone significant changes: single pipes have appeared instead of twin exhaust pipes, and now there is an aggressive sports diffuser between them. Inside, there are comfortable sports seats covered in Alcantara, a sporty leather steering wheel with an MMI control system and a comfortable control system with navigation and a large monitor. As an option, Audi offers to give the cabin a powerful BOSE audio system, heated front seats, a tire pressure monitoring system and a parking assistant. Some comfort RS6 gives the dynamic dynamics control system «Dynamic Ride», which reduces lateral rolls and unnecessary dynamic drops. 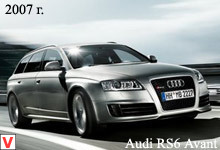 As an option, there is also the possibility of adjustment in the three-stage mode of the sports chassis, what makes the RS6 dynamic base more compatible with a particular highway. Do not forget about the ESP system, which will keep the driver within certain limits of the possible. The new RS6 was shod with 19-inch wheels with 255/40 tires.