For the first time, the Audi RS5 was presented to the public in early spring 2010 at an exhibition in Frankfurt. The car is a "charged" version of the model A5. It differs from the S5 by a more aggressive aerodynamic body kit, 19-inch alloy wheels and an integrated rear spoiler, which automatically extends when it reaches a speed above 120 km / h. The car received the Xenon-Plus headlights, a gray grille, enlarged air intakes in the bumper, extended fenders and aluminum lining on the exterior mirrors. Distinctive features of the rear of the car: oval exhaust pipes and a large diffuser. The Audi RS5 coupe salon emphasizes the sporty character of the car.

Standard front seats can be replaced with bucket seats or ventilated seats with climate control. Alcantara leather interior adds chic to the car. The whole interior is designed in black. The main disadvantage of the cabin can be called the relative minimization of space in the rear seats. In contrast to the small space at the rear of the cabin, there is a roomy trunk of 455 liters. Audi RS5 is equipped with a four-wheel drive, naturally aspirated V8 4.2 FSI engine with direct injection capacity of 450 horsepower, which is paired with a seven-speed robotic gearbox S tronic. 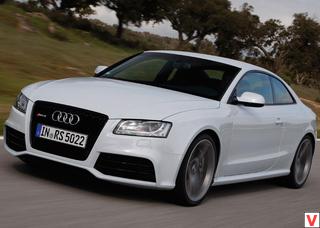 The gears can be switched completely in automatic mode, or in manual mode - with the help of the gearshift paddles on the steering wheel. Acceleration from 0 to 100 km per hour occurs in 4.6 seconds. The official maximum speed of the car is 250 km / h. Fans of high speeds for an additional fee can remove this electronic limit, and then the top speed coupe will be 280 km / h. The engine is assembled in manual mode at the car factory in Hungary in the city of Gyor. The total mass of the finished engine is 216 kilograms. A quick departure from competitors at the start is provided by the race start function (Launch Control), and the grip is the task of all-wheel drive.

By the way, it is equipped with a new middle differential called the “differential with crown gears”. This limited slip differential distributes up to 70% of the traction on the front axle and up to 85% on the rear axle. The standard distribution remains the same - 40:60. 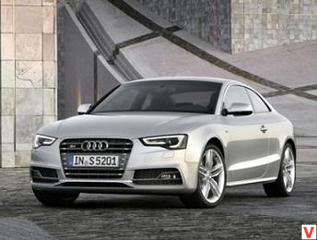 Optionally, on the rear axle, you can install a sports differential, which further redistributes the torque between the 19-inch wheels with 265/35 tires. As an option, you can also order 20-inch wheels with tires 275/30. The ground clearance of the RS5 in comparison with the standard model is reduced by 20 mm. Slow down create brake discs with a diameter of 380 mm in front and 365 mm in the rear. The black painted brake calipers are made of aluminum and decorated with RS. Safety is provided by the ESP stability control, which Audi has adapted specifically for the RS5.

For this, they made it multi-stage, integrated a module for managing a sports differential, and also made it possible to actively intervene in the operation of the engine and exhaust gas dampers. Separately, it is worth noting the wide spectacular color scheme of the car. The developers provided eight colors for coloring, including two black versions (Phantom and Panther), red Misano, three white versions of Ibis, dark blue Sepang and silver color solutions. Five of the eight coloring color schemes are named after the most famous racing tracks. A year after the debut, the car was restyled. The premiere of the Audi RS5 2012 model year was held at the Frankfurt Motor Show.

The car will be available for sale in the Old World at the end of 2011, and it will reach Russia in the first quarter of 2012. The updated RS5 has acquired several new bright nuances for a more fresh look, although at first glance these changes are not obvious. The grille and headlights got a couple of extra corners - now each of these elements is a hexagon. Also, the rear optics has changed a bit, and the wheels have received a new design. Inside they replaced the steering wheel, s-tronic “robot” selector and small trim details. Technical parameters of the machine remained the same.

It is expected that in the near future an open version of the Audi RS5 model will be patented.