Audi Q7 - a car that represents the world-famous German company in the segment of SUVs. Audi Q7 is a successful combination of sporty character and versatility, the most modern technologies and luxury of a luxury car. Driver conquers driving performance and dynamics of a sports car. The brainchild of the creators of the legendary all-wheel drive quattro on any road and in any conditions as reliable as possible. Audi Q7 sets new trends.

The car was specially designed as the largest European jeep. The dimensions are impressive: length - 5086 (more than the Hummer H2), width - 1983, height - 1737 mm. The base is not less impressive - 3002 mm. Its swift lines, smooth bending of the roof, protruding body surfaces, which, in contrast to the flat windows, create the perfect harmony of sporting character and luxury. The rapid bends of the lines of the front and rear overhang, powerful fins of the rear with strongly inclined struts create a powerful and memorable silhouette. The grille in the style of “Auto Union” models is based on a powerful, but not without grace bumper. 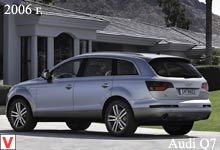 With the shape of the headlights they decided not to subtilize - they are extremely concise and at the same time very effective. Frying a stern is crowned with the brand-name wing taillights that have already become. And the front bumper is continued in powerful stamping around the perimeter of the body and impressive wheel arches. For driving advantages meets the independent suspension of all wheels with double wishbones, providing high off-road ability. Standard elastic elements - springs. And as an option, an adaptive air suspension with an electronic system for changing the characteristics of shock absorbers can be installed. The ground clearance of the Q7 can vary within 180–240 mm.

When you turn on off-road mode, it sets the ground clearance of 205 mm. It also has the function of adjusting the loading height. ESP (installed in the standard) has acquired several new functions: help when descending from the mountain and the trailer stabilization system.

For a fee, you can choose the Audi Side Assist system with radar control maneuvers for changing lanes and advanced parking sensors with light and sound alarm and a rear-view camera. Despite its size, the Q7 is capable of racing at the speed of a sports car. The tremendous dynamism of this giant strikes, and this does not affect the degree of passage of difficult sections of the road. The car behaves beautifully and on the highway, and on the deep roads. Audi Q7 Dimensional SUV is beautiful not only outside but also inside.

Standard equipment includes an innovative operating system MMI, well known to motorists on models A6 and A8. Powerful SUV is equipped with various driver assistance systems, first introduced into mass production. The huge trunk closes and opens with a button - you will never get dirty again. The system of electronic recognition of the owner will allow you to open the doors and start the engine without removing the key from the pocket. The Q7 is literally crammed with options, but this is what gives the driver endless choices. 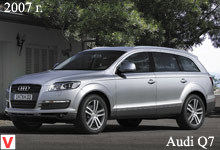 You can relax, delegate authority, and the car will do everything itself: change gears, keep cruising speed convenient for you, turn on and off the light, scrape glass wipers, turn off music during a mobile phone call, monitor the distance to neighboring cars when changing traffic in a dense stream, heart-rending screaming parking assist when parking and even controlling the separation. Electronic driver's seat adjustments have a memory on the preferences of the two drivers. For passengers - other joys.

According to the creators, the new approach to the transformation of the passenger compartment is implemented in Q7: the car allows you to create at least 28 variants of seats and loading space. Three rows of seats can accommodate up to seven people. Second row seats have independent longitudinal adjustment. 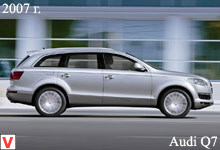 The second and third rows of seats can be folded, having a luggage compartment with a flat floor that can accommodate 2035 liters (there is no need to remove the seats). In the five-seater version of the same Q7 trunk volume is 775 liters. Under the hood, a large, powerful and agile gasoline engine V8 of 4.2 liters capacity of 350 hp There is also the so-called economical diesel version with turbocharging: V6 engine, three liters, 233 horses. The engine is paired with a six-speed automatic Tiptronic with the possibility of manual gear shifting and petals on the steering wheel.

The standard Audi Q7 - permanent all-wheel drive system Quattro, which has a 25-year history. The latest generation Torsen differential in “standard” road conditions distributes the torque between the front and rear axles in a 40:60 ratio. Audi Q7 lasted three years without changes. In 2009, the restyled version of the model was presented at the Shanghai Motor Show. The car received a new bumper, grille with a chrome “fence”, updated LED optics. Side restyled Q7 can only be distinguished by slightly modified thresholds. To the old colors of the body added four, including the trendy brown "metallic".

The interior has not changed much: additional finishing options have appeared, LED lights, a dashboard has a larger display. Also, the updated Q7 has a three-spoke steering wheel and an abundance of chrome in the decoration of interior parts. Worked on the engine range. The emphasis was on economy and ecology. Thus, the gasoline 3.6 FSI moderated appetites at the expense of a new recovery system.

Its meaning is that when braking, the excess energy produced by the motor takes the battery. And then - during acceleration - the battery gives back energy. As a result, the load on the generator is reduced and the car requires less fuel. Diesel 3.0 TDI "ecological" modernization also did not pass. The unit received a new injection system and neutralize exhaust. Engineers reduced the consumption of diesel fuel - by 0.2 liters for every 100 kilometers (up to 9.1).

Turbo diesel 4.2 TDI added power, it increased by 14 hp up to 340 hp The crown of the line of power units is a 6-liter V12 with a capacity of 500 hp, which appeared on Q7 in 2008. He accelerates the car from place to hundred in just 5.5 seconds. Of the innovations, carbon-ceramic brake discs with a diameter of 420 mm at the front and 370 at the rear are also worth noting. But to put such powerful brakes can only be on the version with the engine V8 and V12.