In November 2008, the next car from Ingolstadt entered the world car market: Audi Q5. Worthy competitor to the BMW X3 and Mercedes GLK. Design Q5 is designed in accordance with the same style of cars of Audi. Among its classmates, the crossover is distinguished by bright solutions in the form of a proprietary radiator grille, original optics and a swift silhouette. The coupe-shaped silhouette of the roof, a large trapezoidal grille and branded optics with a “ribbon” of LEDs have become the hallmark of the new “crossover”.

The back of the car with elegant LED optics and a dynamic line running across the entire fifth door area adds thoroughness to the exterior of the crossover and adequately completes the stylish and dynamic look. The Q5 crossover is built on the same platform with the A5 coupe and the A4 family. The main advantage of the MLP (Modular Longitudinal Platform) platform is the new layout of the engine compartment, which allowed the front axle to move forward, and the engine and gearbox to move backward - closer to the center of mass. 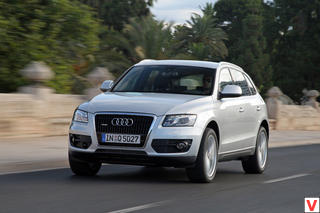 This improved the vehicle's weight distribution and increased the distance between the front and rear wheels. The wheelbase is 2810 mm. With such data on the back of the couch is not even close to three - there is plenty of legroom here.

In addition, the backs of the back sofa are adjustable in inclination, and for a surcharge the sofa can be “taught” to move longitudinally within 10 cm. With the backs of the rear seats raised, the boot luggage space is 540 liters, adding the second row, we get 1,560 liters. Audi Q5 noticeably smaller older brother Q7. The length is 4.63 meters, width - 1.88 meters, height - 1.65 meters. The reduced overall dimensions of the Audi Q5 directly affected the weight of the model; it became 500 kg lighter than the Q7 and therefore gained more dynamism in driving. By the way, the SUV sets a record bar in its class as a car with the lowest drag coefficient of just 0.33, which is typical for cars. 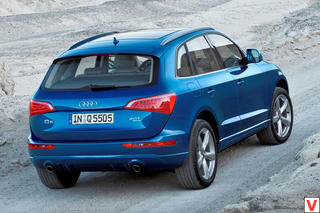 Ergonomics is at a height, fabric seats with mechanical adjustments hold passengers tightly, and the ranges of adjustments are huge. As befits a premium class car, high-quality materials are used in the decoration: exclusive woods, aluminum, chrome, leather and alcantara, available in various color combinations. The Audi Q5 comes standard with an electromechanical parking brake, an intelligent key chip, dual-zone climate control and an audio system with 8 speakers. 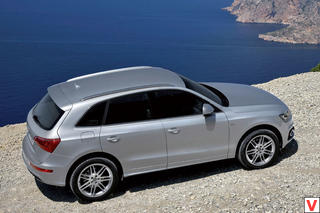 The standard equipment includes a full drive system with an asymmetrical center differential Torsen. In normal driving mode, four-wheel drive provides power distribution between the front and rear axle in a ratio of 40:60. When the wheels slip, Torsen instantly transfers up to 65% of the thrust to the front axle, or up to 85% to the rear.

The crossover is not intended for serious tests with snow or mud, but it has a good reserve. The Audi Q5 has 200 mm ground clearance, the car can force fords up to half a meter in depth and climb hills with a slope of up to 60 percent (which corresponds to an angle of 30 degrees). The line of power units consists of three engines: one petrol and two diesel TDI. 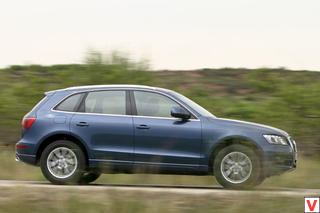 The seven-speed S-tronic can be switched automatically or manually by the driver directly from the steering wheel Q5. The front and rear of the Audi Q5 suspension on double wishbone, coil springs, and transverse stabilizers. For the most demanding customers, Audi has provided the Drive Select system (option) in the cabin of its Q5, which can operate in several modes (Comfort, Auto, Dynamic). The system allows you to rebuild the dynamic characteristics of the car and controls the operation of the engine and the operation of the car suspension.

Car safety, as always at the highest level. Audi Q5 received the highest - "five-star" - the result in the Euro NCAP safety test. Seven airbags (front, side, curtain airbags), three-point automatic seat belts for five seats with mechanical height adjustment, Isofix attachments for fixing child seats in the rear side seats, as well as an impressive list of auxiliary systems helped to achieve this result.

Warn shock injuries are designed built-in retention of the head and seat optimized design. The rear side members, rear wheels and parallel bars in the body of the Audi Q5 are specially designed to absorb impact energy. The fuel tank is located in a protected area in front of the rear axle, and the fuel pump shuts off when it receives a collision signal.

Any buyer can rely on the ESP stability control system with additional off-road functions (Off Road mode, mountain descent assistant, provision of lateral stability, the function of recognizing the presence of cross rails on the roof), as well as ABS, EBV brake force distribution system, electronic EDS differential lock; Audi parking system plus (acoustic parking system); and Brake Assist. The list of additional equipment of the model also includes the Lane Assist road marking system, which makes the car’s steering wheel vibrate whenever its driver starts to change lanes without turning on the turn signals.

Additionally, the Audi Side Assist system is also installed, consisting of two warning lights that start flashing as soon as a car appears in the “dead zone” area. The Adaptive Cruise Control system maintains the necessary distance to the vehicle ahead. In addition, for an extra charge, a car can be installed: a tire pressure monitoring system and a Audi parking system advanced comfort parking system with a rear-view camera. Audi Q5 is a combination of excellent handling and high-quality performance. Such advantages can undoubtedly bring this car to the leaders of the premium compact crossover segment.

After four years of production of the Q5 mid-size crossover, Audi has prepared its updated version of the 2013 model year, which debuted at the Paris Motor Show 2012 worldwide. The exterior has not undergone major changes. Restyled Q5 received a modified grille, slightly retouched head optics and taillights, as well as slightly corrected front and rear bumper. Changes made to the appearance of sports notes, which visually emphasized the dynamism of the crossover.

The model received 4 new colors. Now the total palette includes 17 options for painting the body. Inside, the crossover changes and even less - you can note the new multifunction steering wheel and improved trim materials. The interior has added chrome parts, or rather, many elements have a chrome edging.

The technical stuffing was partially modernized for improvement of comfort and road performance. Engineers upgraded the suspension, replacing the springs and shock absorbers with new ones, and the hydraulic power steering gave way to electromechanical. Economical engines of the new generation will be pleased with the excellent dynamics and low carbon dioxide emissions into the atmosphere. From now on, instead of the 3.2-liter petrol V6, a 272-horsepower “six” of 3.0 liters is offered for the crossover. This engine consumes 8.5 liters per 100 kilometers.

The three-liter diesel added an additional 5 hp to the recoil. and now produces 245 hp and 580 Nm. This power unit is paired with a 7-speed “automatic” S tronic and all-wheel drive, consumes 6.7 liters per 100 km. The rest of the engines remained the same, and the Q5 hybrid version, combining a 2.0-liter gasoline turbo engine with a capacity of 211 hp, was preserved. and a 54-horsepower electric motor. All engines are equipped with direct injection and turbocharging. Gasoline engines are equipped with a start-stop system, and fuel consumption has decreased by an average of 15%.

So, the engine capacity of 177 hp and 380 Nm of torque in combination with the automatic transmission S tronic and quattro all-wheel drive system consumes 6 liters per 100 kilometers. The flagship of the gasoline range will be a 4-cylinder 2.0 TFSI engine equipped with a temperature control system, a turbocharger, a fuel injection system, valve control and operation, and integration of the exhaust manifold in the cylinder head. This engine develops 225 hp. and 350 Nm.