Audi, after the release of the next Q5 model, thought about expanding the Q series to another model, a new Audi Q3 compact crossover. The car debuted in mid-2011. For the concern, it is a strategically important step in winning the market. The model will become a direct competitor to the BMW model X1. Interestingly, the cars are assembled not in Germany, but in the Catalan town of Martorell at the factory of the well-known brand Seat. Externally, the new car reminds us well of the previous models Q7 and Q5. The main difference from them is the size of all three models.

Audi Q3 is based on the Volkswagen Tiguan, the recognized leader of all compact crossovers. However, even despite the increased wheelbase, contrary to the trend, it is smaller than the co-platform. The length of the Audi Q3 is 4.39 meters, width - 1.83 meters, and height (including roof rails) - 1.60 meters. However, there is plenty of space inside. 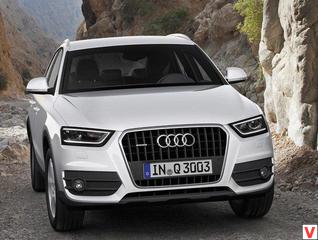 The only engineers had to abandon the longitudinal adjustment of the back of the sofa. Audi Q3 has the most sporty design in its segment. The dominant element of the front is a large singleframe grille with bevelled upper corners. Its shape is found in the dynamic contours of the hood.

On request, xenon bifunctional headlights with LED daytime running lights can be ordered. Included with them are LED strips in the rear lights. The two exhaust pipes are spaced apart at the rear. The wide rear door is set on the sidewalls, resembling the older models - Audi Q5 and Q7. 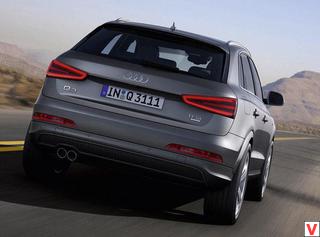 It greatly facilitates loading and visually emphasizes the width of the car. The drag coefficient (0.32) is unique for this segment; headliner ensures optimum distribution of the air flow under the car. The manufacturer offers twelve exterior colors and five versions of exterior trim packages. Details for the lower protective panels and lining of the wheel arches can be made in black or painted in body color or anthracite gray (anthracite gray). Audi's exclusive offroad exterior trim package will visually expand the body and underline the powerful outlines of the Audi Q3. Classic package exterior trim S line was created for fans of sports style.

The Q3 is a five-seater saloon with a typical high-quality finish, typical of all Audi cars. Of course, it is not as spacious as, for example, the Q7, but it does not lose in comfort either. The finishing applied high-quality soft-touch plastics and expensive soft skin. Hard front seats are comfortable, ergonomics at altitude. The luggage compartment is 460 liters (100 liters less than the Q5).

With the rear seats folded down, luggage space can be increased to 1365 liters. Optionally, the standard equipment can be supplemented with a variety of luxury options. Among them - the system of adaptive lighting (adaptive light) (ordered in combination with xenon bifunctional headlights), which guarantees excellent lighting both when driving in a straight line and in bends. An improved parking assistant will warn you of obstacles, even if they are on the side of the car. A panoramic roof, LED interior lighting, sports seats and an aggressive body kit. For installation on the Audi Q3 offers a wide range of different information and communication systems.

The equipment list includes the MMI Navigation plus navigation system with a large hard disk and the premium sound system Bose Surround Sound with spectacular backlight of the front woofers. The car received a new multimedia system with a built-in Bluetooth headset, which will allow the driver to talk without problems while driving. The main feature of such a system is the ability to distribute the Wi-fi network and the ability to work in the network of the new generation 3G.

Under the hood, you can find one of two two-liter diesel engines with a capacity of 140 and 177 horsepower, or one of two gasoline units, the volume of which is the same two liters, developing a power of 170 and 211 hp. For the driver, perceiving cars only with obstinate character, will be available crossover with a nameplate "S". Five-cylinder engine of 2.5 liters capacity of 300 hp Transmission to choose from - either a 6-speed "mechanics" or a robotic 7-speed S-tronic automatic transmission with two clutches. The body of the Audi Q3 is distinguished by its high rigidity, crash safety and acoustic comfort.

The frame of the body is made of sheet metal of variable thickness and steel parts of hot forming, characterized by ultra-high strength. The small thickness of the parts significantly reduces the total weight. The hood and rear door of the Audi Q3 are made of aluminum. More than five parking assist systems are installed on the Audi Q3. The car around the perimeter is equipped with 12 ultrasonic sensors. Along with this, Audi is equipped with a strip-keeping system, while on the move, with an active rebuild function.