For the first time, Audi introduced its concept Sportback Concept in January 2009. A year and a half later, the German automaker presented the ready-to-produce A7 at the Paris Motor Show, and in 2011 it debuted in the US market. The car of 2012 is produced only in the hatchback version. Almost five meters in length (4969 mm) and almost two in width (1911mm) - with such dimensions Audi A7 Sportback, without a doubt, declares its affiliation to the cars of a class "luxury".

The main feature of the appearance of the novelty is a completely new 5-door body structure with a lowered roof for the Audi model of this class. The front part of the car is endowed with features characteristic of modern Audi models. The Germans installed a new grille, made the nose lower, narrowed the front optics, and drew a line on the sides that increased sharply from nose to tail. The back and tail boasts wide profiles, large side lights and a perfectly integrated dual exhaust pipe. In order to reduce weight, Audi specialists paid great attention to the use of aluminum in the design of the car. 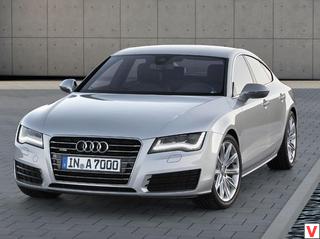 The extensive use of aluminum in the design of the car helped to reduce the weight of the doors, hood, front partition and traverse in the trunk. As a result, the all-wheel drive version of the A7 has a curb weight of 1,695 kilograms. In general, the total weight of the new item has decreased by 20 percent, compared to a standard car of the same size. I must say that reducing weight gives a tangible increase not only in the dynamic characteristics, but no less seriously affects the controllability of the car. The level of interior decoration is not inferior to the executive class models.

The interior is dominated by light forms, and a distinctive feature is the asymmetry, which is present even in the design of the central air ducts. The cabin has four seats, full of luxury and innovative technologies. The interior of the A7, with its refined and luxurious finish, is almost devoid of plastic, mainly leather, wood and metal are used in the decoration. Walnut is used in the interior trim, but company representatives offer a new version using light wood with dark veins. The backs of the rear seats, as befits a car with a 5-door body, can be folded up by increasing the already rather big luggage compartment from 535 to an impressive 1,390 liters. 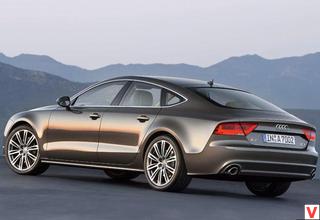 Russian buyers Audi A7 Sportback have the opportunity to make a choice in favor of the multitronic gearbox, transmitting torque to the front wheels, or the 7-speed S tronic gearbox, which is installed in conjunction with the new-generation all-wheel drive quattro system. True, the choice of transmission is only in the modification with a 204-strong turbodiesel. The rest of the Audi A7 will only be equipped with a robotic gearbox and the quattro proprietary all-wheel drive system, where under normal conditions torque is distributed in the ratio of 40:60, up to 85 percent of the torque can be realized through the rear axle through the front axle .

The list of standard equipment of the Audi A7 Sportback in Russia includes such technological options as Audi drive select systems, MMI Radio Plus with a CD player and two slots for two SDHC cards, Audi parking system plus, climate control with an air regulation system and individual settings for the driver and front passenger, bi-functional xenon adaptive headlamps with washer and many other options. The car is offered as standard with ABS, stability control, front airbags, front side airbags and side curtain airbags. Additional options include rear side airbags, alarms, warning systems and mitigate the front and rear collisions.