Audi A1 - the most compact car in the model range of the German company. Three-door hatchback with a sporty design. The body turned out attractive, its appearance conveys the swiftness of the car and emphasizes the sporty character. The massive grille is not forked, has a chrome trim. The hood lid as if hanging over the headlights, giving the car a formidable look. The sharp edges of the bumper on both sides of the grille seem to underline the expressiveness of the headlights.

The wheel arches are surrounded by a graceful smooth line, but the wings do not bulge much, which gives Audi a practical look, contributing to the absence of any decorative excesses. In general, the model looks interesting and attractive. A novelty for Audi was the contrasting color of the front and rear pillars. Available as an option. The first prototype A1 was shown three years ago. At the Tokyo Auto Show in 2007, the company introduced the Metro Project Concept, followed in 2008 by the five-door A1 Sportback concept. 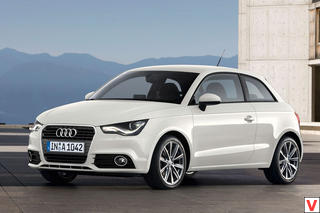 The car is based on the Volkswagen platform, on which models such as the VW Polo and the Skoda Fabia are built, however, Audi engineers modified the chassis in order to give the car a more sporty behavior. The length of the A1 is only 3.95 m, the width is 1.74 m, the height is 1.42 m, and the wheelbase of the model is 2.47 m. The car is designed strictly for four passengers. Fifth simply have nowhere to sit because of the mini table organized in the rear seats with holders for glasses and bottles. It is located right in the middle of the rear passenger seat. Due to the fact that the roof line is strongly arched, adults behind them will have to feel the ceiling over their heads.

The driver's seat has a low landing characteristic of sports cars. Despite this, the view of the road remains good. The driver's seat is regulated not only lengthwise, but also in height. In general, the chairs are comfortable, have a fairly good lateral stability. The steering wheel is made of three spokes, has adjustment parameters for the angle and depth. Ergonomic panel is conveniently tailored to the driver. The interior is trimmed in leather. The colors are artfully matched. 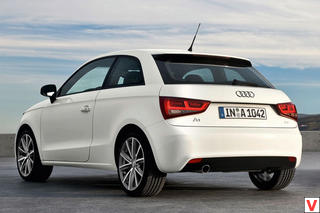 The harmonious color rendition of light gray with black color gives the cabin a solid and comfortable look. Everywhere famous brand quality: accurate fit panels with narrow and even gaps, "premium" finishing materials. Upholstery fabric pleasant texture. For luggage there is only 270 liters of free space, however, the rear seats can be folded, thereby increasing the volume of usable space to 720 liters. Soundproofing cabin at a height: the driver and passengers are not annoyed by noises and squeaks. The line of engines Audi A1 includes four power units. The power range of two petrol engines TFSI and two diesel TDI is 86 hp (63 kW) to 122 hp (90 kW).

All engines are equipped with the latest technology. All engines use direct fuel injection and turbocharging. The concept of reducing the working volume in combination with the modular platform to increase the efficiency of Audi provides impressive power with low fuel consumption, ranging from 3.9 to 5.3 l / 100 km. The base engine is a 1.2-liter turbocharged engine. It develops power of 86 hp (63 kW) and already at speeds from 1500 to 3500 rpm, it develops a maximum torque of 160 Nm.

By default, all engines work in conjunction with a manual transmission, and for a 1.4-liter gasoline unit, you can choose a S-tronic dual-clutch 7-speed transmission. All engines imply a start-stop system as well as an energy recovery system. For Audi A1, two main trim lines are offered: Attraction, which implies a rich set of equipment, as well as a sporty and dynamic Ambition option. Attraction's finishing line includes a number of improvements in the area of ​​comfort: the chorus audio system, central locking with remote control, electric adjustment of exterior mirrors, electric windows and a height-adjustable driver's seat.

As for passive safety, standard equipment includes two front airbags, side curtains and head airbags. The kit is complemented by seatbelt tension limiters, Audi's integrated head restraints and Isofix anchorages for installing child seats in the rear seats. Bundling the Audi A1 Ambition is easy to distinguish by 16-inch alloy wheels and fog lamps. Interior Ambition is complemented by a sports steering wheel with leather braid, trim elements of the cabin aluminum inserts, sports front seats with easy-entry system, with lumbar supports and adjustable in height. But these are only purely external differences.

With regard to technological equipment, the Ambition version provides a driver information system (DIS) with a program to improve the performance of the vehicle. On the display located in the center of the dashboard, information about the state of the vehicle at the moment of movement is given, allowing the driver to choose the most effective transmission in one way or another. A comfortable lounge with an emphasis on details plus perfect German technical “stuffing” make A1 not just a pretty little compact car, but a formidable competitor ready to take away the tasty part of the market from such iconic models as the Mini and Fiat 500.

Of course, the Audi A1 is not the top of practicality and such a machine is unlikely to choose a family man. But this model will be loved by wealthy young people who need a stylish car and to drive fast and comfortably. Almost two years after the appearance of the A1 A1, Audi has expanded the range of “one” bodies with the five-door Sportback version. An extra pair of doors added to the exterior not boredom at all, but on the contrary - grace and stature.

With the same length of 3954 mm and wheelbase of 2469 mm, the Sportback is wider and taller than the three-door counterpart. In both cases, the increase in size was 6 mm. But the door version Sportback 240 mm shorter than the three-door. Despite the elongated and higher roof, as well as the body grown in width, the drag coefficient has not changed and, like the three-door car, is equal to 0.32. One of the best performance in the classroom. Weight gain was only 25 kg. The basic version of the five-door "unit" weighs 1065 kg - Audi says it is the lightest premium compact on the market.

As for the three-door, for the A1 Sportback there are available contrasting colors for the roof and the body and several styling packages offering various bumper and sill trims, spoilers, diffusers, colored interior panels and other exterior and interior decor elements. Exclusively for the modification of the A1 Sportback, the color Samoa Orange Metallic was developed. Design, interior trim and equipment are typical enough for Audi. The interior offers a variety of colors of seat upholstery with the same inserts in the edging of the speakers and air vents. You can even choose the color of the ceiling. The front seat is quite spacious, and the range of adjustments is traditionally large.

The overhead space in the rear passengers is larger than in the three-door A1. Unlike the usual A1, which is only four-seater, the Sportback buyer can choose the number of passenger seats. So, in the “base” A1 Sportback - a four-seater, and between the rear seats there is a plastic tray with cupholders and a niche, but if the client wishes, the car can be equipped with a one-piece cushion on which three people can fit, and this option is free. The boot capacity is 270 liters. Folding and folding back of the back sofa allows you to increase the transport capacity of the compact Audi to 920 liters. 4 petrol engines are available.

The initial gasoline engine - 1.2 TFSI - develops power of 86 hp, and thanks to a special temperature control system, it was possible to limit fuel consumption to 5.1 liters per 100 km. This version of the engine is offered only with a 5-speed manual gearbox. The line continues with two 1.4 TFSI units with a capacity of 122 hp. and 185 hp The last engine with a compressor and turbocharging allows you to accelerate to a hundred in 7 seconds and travel at a maximum speed of 227 km / h. This pair of 1.4-liter turbo engine is completed with seven-speed robotic "mechanics» S-tronic. The 1.4-liter unit with a power of 140 hp became a novelty for the petrol engine range.

It is noteworthy that it is not only more powerful, but also more economical than its 122-strong fellow. The average fuel consumption in the A1 Sportback combined cycle with a new 140-hp engine and a robotic transmission is declared at 4.7 liters per 100 km, while the 122-hp version consumes 5.3 liters. The fact is that the new engine is able to disconnect a pair of cylinders when it does not require full power. This decision, which received the name “cylinder on demand” in Audi, came from the world of large V8s and allows the unit to save up to 1 liter of fuel per 100 km. At low loads, the two cylinders stop burning fuel, and the car moves with the help of the remaining two.

Disconnection occurs completely unnoticed, and you can learn about it only by the inscription on the display of the onboard computer. Gamma diesel units consists of three engines. The volume of 1.6 liters and a capacity of 90 and 105 hp The weaker one has a choice of a 5-speed manual box or a 7-speed S tronic, a more powerful one - only manual. According to the manufacturer, both will burn only 3.8 l / 100 km. The most frisky of diesel engines 2-liter engine producing 143 hp It accelerates the A1 Sportback to 100 km / h in 8.5 seconds, and the average fuel consumption with it is 4.1 l / 100 km.

In percentage terms, the distribution of weight depending on the motor varies in proportion 61–63% to the front axle and 37–39% to the rear axle. It is worth noting that, in contrast to the older models of the brand with aluminum pendants, in the A1 Sportback the details of the front suspension, subframe and front levers are made of high-strength steel. A similar semi-dependent rear suspension is made from a similar metal, in the construction of which a torsion beam is applied. In addition to the stiff sport suspension and low-profile tires, the ESP stability control system also contributes to the handling.

In turn, if necessary, ESP brakes the inner wheel, directing the maximum thrust to the outer wheel, which makes the car's handling more close to neutral. Among the interesting electronics, the A1 Sportback offers a built-in wireless Internet access point, navigation with advanced voice control (the address can be dictated in one phrase or you can search for sights in the same way), a Bose speaker system with 14 speakers, an MMI infotainment center, a Bluetooth phone and other solutions.

Among other options, there is a bi-xenon light with automatic switching near / far modes, a panoramic roof with a hatch, LED rear optics, “Multifunction” with transmission control lobes, an electronic key and much more.