Audi 100 - front-wheel drive car with excellent dynamic performance, handling and comfort during long driving. For many reasons, the Audi 100, which was produced from 1969 to 1976, can hardly be called the ancestor of the family. First of all, these are some constructive solutions that have never been repeated on these machines, and thanks to which the first Audi 100 remained the car of the early 70s, laying only the concept of large cars with drive to the front axle and longitudinal engine.

The next generation of this model basically fixed technical solutions, which later with modifications lasted for a long time. The new generation Audi 100 was introduced in June 1976. Initially, two-and four-door sedans were produced, and in September 1977 a station wagon was added to them, which because of the large angle of the tailgate was more like a hatchback. Externally, the new Audi 100 was very much like an enlarged Audi 80 of the same model year. 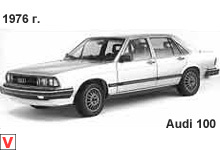 They were similar and structurally - the front suspension Mc Pherson, rear - semi-independent beam on the trailing arm with Panhard, although in the power units for the Audi 100 emphasis was placed on more powerful engines. In the United States, this model was sold under the Audi 5000 symbol. However, there was one circumstance that emphasized the uniqueness of these cars. Just in time for the release of the new generation Audi 100, the world's first 2.2-liter five-cylinder gasoline engine was prepared, combining the power of a six-cylinder and the economy and compactness of a four-cylinder engine.

It is these inline five-cylinder engines, which appeared on the Audi 100 in 1977 and became the hallmark of the new family and then extended to the younger class. In 1978, diesel engines appeared on the Audi 100 for the first time. At the end of 1979, the top version of the model 100 with its own name, the Audi 200, appeared. It was distinguished by a high level of basic equipment and was equipped only with the most powerful five-cylinder engines, including turbo engines. Audi 200 did not have a station wagon and was produced in this body until 1984 inclusive.

The family of front-wheel sedans Audi 100 (series 44) of the third generation was in production from September 1982 to November 1990. This full-size sedan caused a sensation at the Frankfurt Motor Show with outstanding aerodynamics for its E segment (according to the European classification) (Cx = 0.30) and even received the title " Car 1983 ". The car really turned out very roomy, economical and low noise. Spacious lounge with comfortable seats, where not close and five tall passengers. Enough energy-intensive and at the same time comfortable suspension.

Amazing capacity 570-liter trunk, and even solid overall load : in addition to five riders, it is possible to transport up to 175 kg of cargo - such a car can be compared with practicality, perhaps, with some station wagons of a smaller dimension. The Audi handling has always been at its best, and the front-wheel-drive "weaving" in this respect, the model is almost legendary. Straight run, precise following of a given trajectory in turns, lack of drifts even on very slippery sections of the road are the distinctive features of the 44 44 Audi 100.

That's just the lack of basic versions of the power steering is strongly affected when maneuvering on tight parking (but it does not need to be repaired). The 44-series station wagon under the traditional name Avant appeared in March 1983 and still surprises many with its extravagance. A very flat for the station wagon rear door reduced the turbulence of the air flow, which improved the aerodynamic characteristics (Cx = 0.34) and reduced the pollution of the rear window. The trunk is almost not injured - its capacity with the rear seats spread out is 1,800 liters.

In January 1985, the all-wheel drive version of the Audi 100 Quattro (440-type) appeared on the market, aided by the traditional Audi longitudinal engine layout in the engine compartment. The Audi 100 Avant Quattro station wagon became a real top model with a similar drive system. who anticipated the appearance of cars for active recreation. The success of the Audi 100 in the automotive market in Europe has also become a wide range of four-and five-cylinder engines with different parameters.

The most practical among them (especially for domestic operating conditions) are the row fours (factory DR, DS indices) with a working volume of 1.8 liters. And if 75 hp for normal acceleration is clearly not enough, the already 90-strong DS with a single Pierburg carburetor is an acceptable option both in terms of dynamics and fuel consumption (10.7 l / 100 km in the urban cycle), besides, its advantage is simple and reliable design. After upgrading in late 1988, this power unit received the code NP. Such models for ease of maintenance will be much preferable to more powerful ones.

but it is also much more demanding in terms of the quality of fuels and lubricants and the level of service of five-cylinder engines, which is especially important for poor people living on the periphery. These injector power units (WH, KP, RT, WC, NF) with a working volume of 2.0, 2.1, 2.2 and 2.3 liters and a power of 100,115,115. and 133 hp respectively. although just as reliable as four-cylinder ones, a major overhaul, for example, when a camshaft drive belt breaks or replacing a fuel pump can hit the owner’s pocket hard.

There were another 2.2-liter 165-hp (MS) and 220-hp 20-valve (2B) engines (since March 1989). Audi 200 externally distinguished chrome edging of the front panel and the smaller size of headlights, as well as leather trim and wooden veneer made of precious wood. After 1985, the company began to produce cars with fully galvanized bodies.

Therefore, traces of rust in places where there are no chips and abrasive wear (wheel wells, sills, bottom) indicate that the car was released earlier. Moreover, on later models such places are additionally protected by brand-name wheel arches and door sills. The Audi 5000 model (044-series) was sold only in the USA from October 1983 to 1988 - these sedans can be distinguished by the level of configuration, which included a dual four-head front lighting system, electric windows and mirrors, mounted in the roof hatch, automatic transmission, coasters (only on request), air conditioning and catalytic converter exhaust.

Audi 5000 complied with the standards for the emission of harmful substances and fuel consumption limits of the US FTC from 1983. In the 1989 model year, the upgraded Audi 100 and Audi 200 were already under their own indices. Of course; The image of the Audi 100 as a prestigious imported mid-size has played a significant role in successful sales. The reconstruction, carried out in January 1988, somewhat smoothed off angular lines of the body, and the SS, CS and CD indices are a thing of the past. There were recessed door handles, chrome disappeared from the bumpers, edging the rear lights and side moldings.

But the airbag on the Audi 100 was never installed, although the car has seat height adjustment. So be careful if you suspect that the car offered to you pulls on a greater age than they say. Since August 1989, all gasoline engines have been equipped with an adjustable neutralizer. In 1989, the production of the Audi 100 2.3 E and the Audi 100 Avant 2.3 E began with a 138-horsepower NF engine, and the 115-horsepower KP engine from 1989 became known as the RT. The last Audi 100 was released in December 1990, when its place was finally taken by the new model of the C4 series. Production of the Audi 200 is no longer resumed.

All of the above advantages were quite visible on the new Audi 100/200 cars, but on most of the specimens whose age of exploitation exceeded nine years, little was left of them. In the last generation, the Audi 100, which was produced from November 1990 to May 1994. All the best features of the corporate style have received their logical development. The classically elegant body shape (enhanced by 30% in comparison with the torsion predecessor) increased the competitiveness of this model in relation to the products of the Mercedes-Benz and BMW concerns.

Superior build quality a three-year guarantee for the lacquer coating and a 10-year guarantee against rusting through the body have become an excellent advertisement for the Audi 100 (C4 series). There was a new suspension (with improved geometry), the cabin was completely rescheduled, it became even more spacious in the rear seats than its competitors - the Mercedes-Benz W124 and BMW E34. The driver’s seat was simply supplied with a striking range of adjustments. The angles of inclination of the front seats and the steering column were easy to adjust to a non-standard figure of the driver.

Door locks have gained a more reliable wedge-shaped design. However, the advantages of a new generation of cars were much greater: a wide list of standard equipment, new fabrics, materials and leather were used in the interior decoration, which is not often found as standard. Although, as you know, the best is the enemy of the good: a very spacious cabin and a roomy 510-liter trunk of 4-door sedans critically tuned the public to 5-door station wagons (since August 1991), the trunk volume of which, despite being more vertical than the previous generation, the rear door turned out to be lower than its nominal class - only 1310 liters!

I must say that psychologists who took part in the testing of the Audi 100 Avant, noted: this machine will retain a high consumer value for a long time after the end of production. Still: excellent dynamic performance, handling and comfort during long rides. What is surprising - the passability on snow-covered roads and during icy conditions in front-wheel-drive Audi 100 was also at its best. All-wheel drive model Quattro appeared in January 1991, its handling and maneuverability proved to be the benchmark for cars of this type, which allowed Audi to practically monopolize the European market for all-wheel drive passenger cars.

Somewhat later, VAG’s engineers were able to offer, as standard, an integral feature of a cool German car, seat belt anchors, airbags for the driver and passenger, central locking, an alarm system, and the Procon-ten integrated passive safety system safety belt in the event of a collision. Initially, three injection engines were used: a 2.0-liter 101-hp (factory AAE index), a 2.3-liter 133-hp (AAR) and a 2.8-liter 174-hp (AAN) with multi-point injection. But in January-March 1991 (with the advent of the Audi 100 Quattro version) they were added: a 2.0-liter 115-horsepower (AAD) with a central injection system and a 2.4-liter 82-horsepower diesel (AAS).

After another six months, the 115-strong 2.5-liter version with turbo diesel (AAT) appeared on the market. The standard for all engines was a 5-speed manual gearbox; under the order, an automatic 4-speed hydromechanical gearbox with an electronic adaptive DSP system was installed, which flexibly adapts to the individual driving styles, which increases the smoothness of gear changes and increases fuel efficiency to the level of models with a manual gearbox gears. The range was crowned with a sporty Audi S4 with a 2.2-liter, 230-horsepower five-cylinder engine (AAN) with multi-point fuel injection and turbocharging.

The maximum speed of the model with a special modified sports suspension with stiffer springs and shock absorbers (because of which the car’s height decreased by 20 mm) reached 240 km / h, and the acceleration time to a hundred took no more than 6.8 s.

In January 1992, a new economical 2.0-liter 115-horsepower engine (ACE) appeared, in March a 2.6-liter V6 (ABC) with 150 hp was produced, but a real groan of delight came in November when the company introduced the S4 4.2 / Avant with a 4.2-liter V-shaped "eight" from the V8 model, which, due to its exceptional characteristics (power 280 hp, acceleration to a hundred in 6.2 s (Avant - for 6.6 s), the maximum speed of under 250 km / h) and, most importantly, the relatively low price for the segment of sports wagons took a worthy place on the automobile Olympus.

The release of the C4 model range called the Audi 100 / S4 lasted until May 1994, when they carried out a major restyling and introduced a new index - A6. Audi A6 is perfect for use in Russia: front or four-wheel drive, fully galvanized body and lower prices for Audi models of early editions make the purchase of this car is quite profitable.