V12 Vanquish debut (English "Winner") was held in 2000. The car has become the new flagship of the Aston Martin model range. It is offered in two versions: with a 2 + 2 seating formula or a double closed. In the form of the body, all the traditional features of Aston Martin cars are reflected: swiftness, dynamism, recessed headlights, closed by transparent fairings. Unlike the DB7 model, the area of ​​the grille has increased, which gives the car a more aggressive look, and the headlights and direction indicators are now made as a single unit. Thanks to the powerful engine and the use of lightweight materials, the model has gained tremendous driving characteristics.

Complementing the picture is the abundance of electronics. All information is processed by the on-board computer (which, according to engineers, can perform up to 2 million commands per second), is displayed, and the most important is duplicated by voice. The design is widely used modern materials and technical innovations. V12 Vanquish body panels, including the floor and front and rear bulkheads, are molded from extruded aluminum. Also in the design of the car used carbon fiber, which replaced aluminum alloys and composite materials. 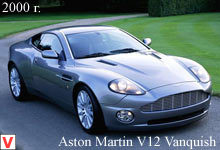 This ensures compliance with the standards of efficiency, structural integrity and protection in collisions, comparable to the requirements for cars of modern Formula 1. The interior is a complete departure from the philosophy of Aston Martin. Salon filled with heavy parts and cold gloss aluminum. From the English style, only elegant instrument scales are preserved, round retro-style watch and the red starter button prevailing on the center console. The quality of finishing materials and thorough assembly at the highest level. 12-cylinder V-engine of 6 liters and 450 hp able to accelerate the car to "hundreds" in 4.7 seconds, and the maximum speed - 306 km / h.

The maximum torque is 556 N • m at 5000 rpm. When fine-tuning the engine, the main task of the designers was to facilitate it, while increasing power. The weight of the crankshaft was reduced by 6.3 kg (it used 8 counterweights instead of 12), hollow camshafts saved 5.4 kg, and another 4 kg won due to precise casting and changes in the design of the collectors. The capacity of the oil pan was reduced from 12 to 9.5 liters. 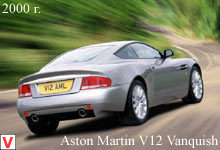 As a result, the engine weighs 290 kg. To protect the car body, made of aluminum and plastic composites, from the damaging effects of high temperatures, the engine exhaust system was wrapped with a special heat-resistant material borrowed from the aerospace industry. PPCs commissioned to develop Magneti Marelli. Electro-hydraulic sequential semi-automatic sequential gear shifting produced by this company provides a transition to any of the six gears in 0.014 seconds, and 0.075 seconds passes between disengaging and engaging the clutch.

Visteon electronic control system provides continuous information exchange between the engine, gearbox and brake system with delays of no more than 8 milliseconds. The same system provides anti-theft vehicle protection. Vanquish is equipped with a full arsenal of electronic driver assistants: ABS, EBD, TCS and WSP (Wheel Spin Protection), which prevents slipping on a slippery road by forcibly changing gears at low engine speeds (3200 rpm) and brakes stalled wheels using working brake system. To curb the heroic power of Aston Martin is designed and the limited slip differential, which works in tandem with the WSP system. 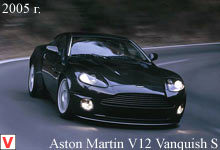 The chassis of the Aston Martin Vanquish was first created by improving the DB7 components, but the high bar raised prompted engineers to start everything from scratch. In particular, a new rear suspension was created with a noticeable longitudinal inclination of the levers to prevent pecking. The development of the suspension was originally carried out in close cooperation with the Japanese tire company Yokohama. We tried 11 different combinations of the mixture, tread pattern, wall stiffness and tire construction, and finally, we found acceptable - 255/40 ZR19 tires were installed in front, 285/40 ZR19 tires in the rear.

Every year, English workers assemble about 300 cars, each manually and individually, so that there are no identical V12 Vanquishs. At the Paris Motor Show in 2004, the Aston Martin V12 Vanquish S was introduced. It features a redesigned exterior design, including a new front bumper, increased air intakes, new 19-inch exclusive wheels and a boot lid that improved the model's aerodynamic characteristics.

Among other changes - increased front and rear brake discs, increased to 355 and 330 mm, respectively, an updated luxurious interior with chamois, alcantara and polished aluminum. The classic for modern Aston Martin V12 engine with a volume of 5.94 liters for the Vanquish S model was upgraded (new lightweight pistons, new intake valves with a new control unit), which made it possible to increase power to 520 HP and the MCM to 577 Nm. As a result, the maximum speed of the S version reaches 321 km / h (against the 306 from the basic version), and acceleration to 100 km / h takes only 4.8 s. 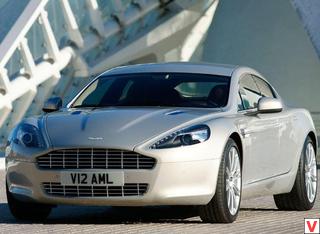 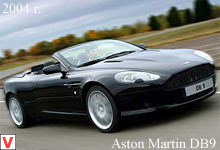 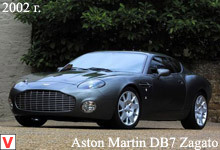 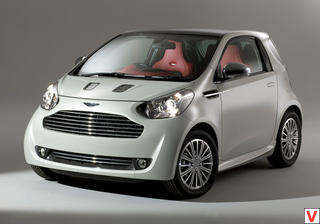