Asia Topic (KIATopic) - a wide range of minibus applications, thanks to the variety of modifications offered by the plant. The first cars of Asia Topic were released in 1987. Buses were manufactured by Asia Motors (a division of KIA Motors), both under the name Asia Topic, and under the name KIA Topic. Asia Topic was produced in 2 body styles: 15-seater passenger and 6-seater cargo-passenger. In 1991, the Asia Topic was restyled: the headlights, lights, mirrors, and some body parts changed. After that, the car became known as Asia Hi-Topic (KIA Hi-Topic).

The Asia Topic engine range consists of two diesel engines. The first has an index J2 - atmospheric volume of 2665 cm ³, it produces about 80 hp, the second - also an atmospheric engine under the index SS volume of 2701 cm ³, its power is about 80 hp Rear suspension Asia Topic - spring with one-piece bridge. Front suspension independent, double wishbone. In front, the minibus has a stabilizer bar, the rear stabilizer is installed optionally. Steering Asia Topic - rack type, power is equipped with an optional. Asia Topic is equipped with a manual 5-speed gearbox and an automatic 4-speed gearbox (3 speed + OVERDRIVE). 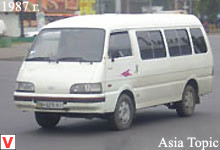 There is the Asia Topic option with all-wheel drive PART TIME (the front axle is rigidly connected). Many of these cars have been serving as taxis in the CIS and Eastern Europe for several years now. 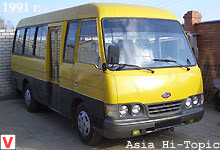 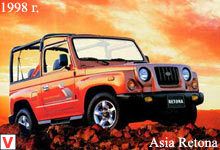